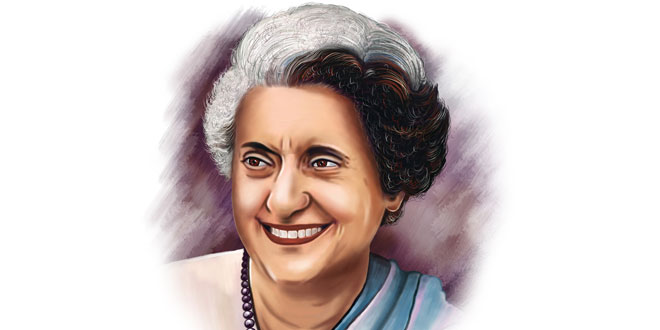 Indira Gandhi was the first woman Prime Minister of Independent India. She was born on 19th November 1917 in Allahabad. At that time there was great political tension in India. India was struggling hard to gain Independence. Her father Jawahar Lal Nehru, a great Indian leader, and mother Kamla Nehru gave a second name as well Priyadarshini, or “dear to behold” After schooling Indira went to the Visva Bharti University founded by Rabindranath Tagore.

Who was Indira Gandhi?

In 1938, Indira entered Somerville College, Oxford. Those who studied with her remember her as a quite but strong willed person. Indira married Feroze Gandhi on 26 March 1942. Although politics was her first interest from a very young age, Indira Gandhi was inducted into the main committees of the Congress Party at a much later stage, and in 1959 she was elected its President. In September 1960 Feroze Gandhi died of a heart attack. Within four years Jawaharlal Nehru was also dead. Indira Gandhi wanted to retire from active politics but the new Prime Minister Lal Bahadur Shastri insisted that she join his Cabinet. She was given charge of the Ministry of Information and Broadcasting.

Shastri’s stay in office was short. Early in January 1966 he died unexpectedly. The country had to find a new Prime Minister. The leaders of the Congress thought that Indira Gandhi would be the best choice. Indira Gandhi easily won the election, and she was sworn in as Prime Minister on 24 January 1966. She was to remain in that office for eleven years. In March 1977, she called for an election, her party was soundly defeated. But it was not long before the tide of people’s sympathy began flowing back towards Indira Gandhi. She won a by election to the House of Parliament. However the house expelled her and she had to spend some days in jail.

The groups which had formed the new government broke up. The new government was compelled to call a general election half-way through its five year term. In January 1980 polls, she was swept back to power. Despite her popularity, Indira Gandhi, like all political leaders, had her share of enemies. One the morning of 31 October 1984, as she came out into the lawns of her house for a television interview, her enemies shot her dead. She was nineteen days short of her sixty seventh birthday.

Only the evening before her death she had spoken to a large gathering a thousand miles away from Delhi, and said: I am here today, but I may not be here tomorrow. Nobody knows how many attempts have been made to shoot me. I do not care whether I live or die. I have enjoyed a long life and I am proud that I spent the whole of it in the service of my people. I shall continue to serve until my last breathe. And when I die, I can say that every drop of my blood will invigorate Indira and strengthen it.