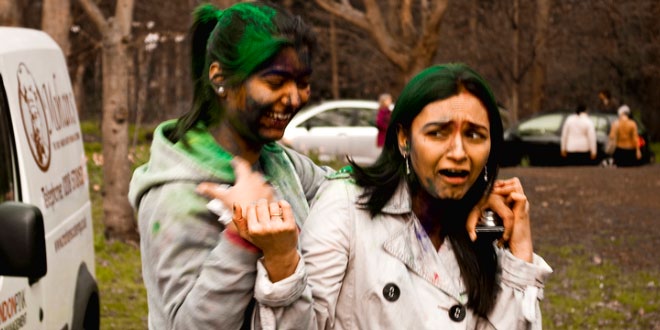 What to Expect During Holi?

Holi is a very carefree festival that’s great fun to participate in if you don’t mind getting wet and dirty. You’ll end up saturated in water, with color all over your skin and clothes. Some of it doesn’t wash out easily, so be sure to wear old clothes. It’s also a good idea to rub hair oil or coconut oil into your skin beforehand, to prevent the color from absorbing.

The Holi festival commemorates the victory of good over evil, particularly the burning and destruction of a demoness named Holika. This was made possible with the help of Hindu god of preservation, Lord Vishnu.

Holi got its name as the “Festival of Colors” from the childhood antics of Lord Krishna, a reincarnation of Lord Vishnu, who liked to play pranks on the village girls by drenching them in water and colors.

In parts of India, Holi is also celebrated as a spring festival, to provide thanksgiving for an abundant harvest season.

When is Holi Celebrated?

Holi takes place according to the Hindu lunar calendar. The festival begins with Holika Dahan on the night of the full moon (purnima) in March each year and concludes with the throwing of colors the following day. In 2021, Holika Dahan is on March 28 and Holi is on March 29.

The festival happens a day earlier in West Bengal and Odisha, where it is celebrated as Dol Jatra or Dol Purnima on the same day as Holika Dahan. In addition, in some parts of India (such as Mathura and Vrindavan) festivities commence a week or so earlier.

Where is Holi Celebrated?

Festivities occur throughout India but are more exuberant in some areas than others. To get an idea of what happens and where, check out these top ways and places to celebrate Holi in India.

Traditional Holi celebrations are biggest in the Brij (also known as Braj) region of Uttar Pradesh about three hours from Delhi, where Lord Krishna is believed to have grown up. Mathura and Vrindavan are at the center of this region. The festivities extend for more than a week there. However, safety issues are a concern for women, due to the rowdy behavior of many local men. So, it’s best to travel as part of a guided group tour.

Rajasthan is a popular Holi destination for foreign tourists, particularly places such as Pushkar, Jaipur, and Udaipur. Many backpacker hostels organize Holi parties for guests there. Rajasthan Tourism also holds a special Holi festival in Jaipur.

How is Holi Celebrated?

People spend the day smearing colored powder all over each other’s faces, throwing colored water at each other, having parties, and dancing under water sprinklers. Bhang, a paste made from cannabis plants, is also traditionally consumed as part of the celebrations.

Special Holi events with music, rain dances, and colors are organized in large cities across India—particularly in Delhi and Mumbai. It’s possible to celebrate Holi with a local Indian family in Delhi and in Jaipur through Tripadvisor.

What Rituals are Performed?

The emphasis of Holi rituals is on the burning of demoness Holika. On Holika Dahan, large bonfires are lit to mark occasion. As well as conducting a special puja (worship ritual), people sing and dance around the fire, and walk around it three times. In some parts of India, people even walk across the hot coals of the fire! Such fire walking is considered to be sacred. One place where it happens is Saras village near Surat in Gujarat.

The destruction of Holika is mentioned in the Hindu text, the Narada Purana. Holika’s brother, the demon King Hiranyakashyap, apparently wanted her to burn his son, Prahlad, because he followed Lord Vishnu and didn’t worship him. Holika sat with Prahlad in her lap, in the burning fire, because it was thought that no fire could harm her. However, Prahlad survived because his devotion to Lord Vishnu protected him. Holika was instead charred to death.

A priest in Falen village, near Mathura in Uttar Pradesh, says his village is where the mythological tale of Holika actually took place. Apparently, local priests have been walking through the raging fire unscathed there for hundreds of years. Since they don’t get hurt, they’re considered to be an incarnation of Prahlad and blessed by him. The priest admitted that he undertakes a lengthy period of meditation and preparation before the remarkable feat though.

Unlike most other festivals in India, there aren’t any religious rituals to be performed on the main day of Holi. It’s simply a day for having fun!

Previous What Rituals are Performed During Holi?
Next When is Holi? Holi Dates This Year