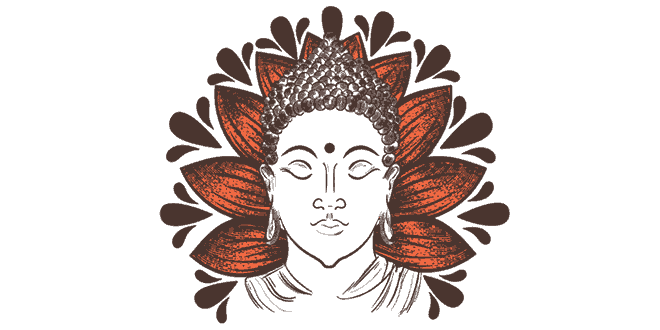 Karma In Buddhism: The Karma or sum of good and bad deeds that a person did in one life, will affect the quality of their next life. Buddhist believe that everyone is reborn, therefore they think that Karma is important in once life.

Karma in Buddhism is the force that drives samsara – the cycle of suffering and rebirth for each being. Good, skillful deeds and bad, unskillful actions produce “seeds” in the mind which come to fruition either in this life or in a subsequent rebirth. The avoidance of unwholesome actions and the cultivation of positive actions is called sila (from Sanskrit: “ethical conduct”).

In Buddhism, karma specifically refers to those actions (of body, speech, and mind) that spring from mental intent (“cetana”), and which bring about a consequence (or fruit, “phala“) or result.

Karma is a concept encountered in several Eastern religions, although having different meanings.

Teachings about karma explain that our past actions affect us, either positively or negatively, and that our present actions will affect us in the future.

Buddhism uses an agricultural metaphor to explain how sowing good or bad deeds will result in good or bad fruit (phala; or vipāka, meaning ‘ripening’).

Solely through our actions?

Early Buddhist writings (particularly SN 36.21: see related links for an annotated translation) suggest that not all that we experience is the result of past action; it may be due to natural events of one sort or another. This is one point on which early Buddhism appears to differ somewhat from later Tibetan teachings, which suggest that all the good and bad things that happen to us are the results of past actions.

Whilst there might be doubt, or different opinions, about why we are experiencing some sort of misfortune, there is no doubt that we can resolve any suffering in the present moment through the Buddhist teachings of mindfulness and action based upon good motives.

Beyond this life: Karma in Buddhism

For Buddhists, karma has implications beyond this life. Bad actions in a previous life can follow a person into their next life and cause bad effects (which Westerners are more likely to interpret as ‘bad luck’).

Even an Enlightened One is not exempt from the effects of past karma. One story tells that the Buddha’s cousin tried to kill him by dropping a boulder on him. Although the attempt failed, the Buddha’s foot was injured. He explained that this was karmic retribution for trying to kill his step-brother in a previous life.

On a larger scale, karma determines where a person will be reborn and their status in their next life. Good karma can result in being born in one of the heavenly realms. Bad karma can cause rebirth as an animal, or torment in a hell realm.

Buddhists try to cultivate good karma and avoid bad. However, the aim of Buddhism is to escape the cycle of rebirth altogether, not simply to acquire good karma and so to be born into a more pleasant state. These states, while preferable to human life, are impermanent: even gods eventually die.

The word karma means ‘action’, and this indicates something important about the concept of karma: it is determined by our own actions, in particular by the motives behind intentional actions.

Skillful actions that lead to good karmic outcomes are based upon motives of generosity; compassion, kindness and sympathy, and clear mindfulness or wisdom. The opposite motives of greed, aversion (hatred) and delusion, when acted upon, lead to bad karmic results.

Karma is not an external force, not a system of punishment or reward dealt out by a god. The concept is more accurately understood as a natural law similar to gravity.

Buddhists believe we are in control of our ultimate fates. The problem is that most of us are ignorant of this, which causes suffering. The purpose of Buddhism is to take conscious control of our behaviour.

The Buddha taught about karmic ‘conditioning’, which is a process by which a person’s nature is shaped by their moral actions.

Every action we take molds our characters for the future. Both positive and negative traits can become magnified over time as we fall into habits. All of these cause us to acquire karma.

This shows why Buddhists place such importance on being mindful of every action they take.

Getting rid of karmic conditioning

Acting on karmic habits increases their strength. Buddhists gradually weaken any negative thoughts and impulses that they experience, through allowing them to arise and depart naturally without acting on them.

In this way karmic habits can be broken.

This view of the world can raise a particularly charged question. Do Buddhists believe that disabled people are suffering for misdeeds in a past life?

The subject is more complicated than it appears, says the Venerable Robina Courtin, a Tibetan Buddhist nun, in this radio discussion on religious attitudes to disability.

Previous The World of Buddhism Quiz
Next What is the World Fellowship of Buddhists?