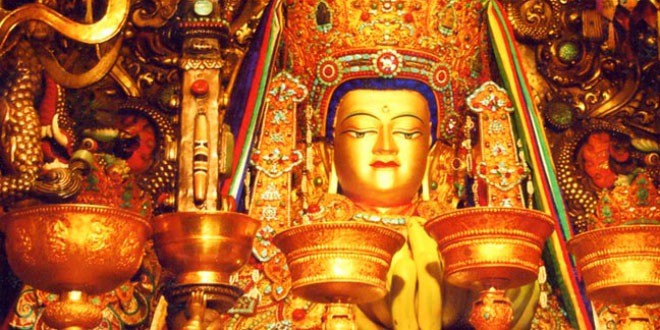 The Graded Path in Tibetan Buddhism Quiz – Lam Rim teachings were disseminated by Tsongkhapa from Tibet. What makes them special that these teachings provide a graded path, where the practitioner completes one stage of practice and proceeds to the next higher one!
Get Started!

It is often said that Buddha gave 84,000 teachings, because what he taught was so varied and vast in topic and scope. While we can greatly benefit from reading the various sutras, it’s often difficult to extract the essence of the teachings in a way that truly benefits us. Here, we look at how Indian and Tibetan masters have done the work for us, organizing the entirety of Buddha’s message into a step-by-step program, known as “lam-rim” in Tibetan, which we can follow all the way to enlightenment.

How and Why to Follow the Graded Buddhist Path

What Is Lam-rim and How Did It Derive from Buddha’s Teachings?

The graded path, lam-rim, is a way to access and integrate the basic Buddhist teachings into our lives. Buddha lived 2,500 years ago, with a community of monks, and later on, a community of nuns. He not only taught the ordained communities, but was often invited to various people’s homes where he was offered a meal and, afterwards, would give a talk.

Buddha always taught with what we call “skillful means,” which refers to his method of teaching others in a way they would be able to understand. This was necessary because there were, and of course still are, so many different levels of intelligence and spiritual development. This led to Buddha teaching on a wide variety of topics at very different levels.

Many of Buddha’s followers had phenomenal memories. At that time nothing was written down and the teachings were memorized by the monks, to be passed down orally to later generations. Eventually, the teachings were written down, and became known as the sutras. Centuries after this, many great Indian masters tried to organize the material and write commentaries on it all. Atisha, one of the Indian masters who went to Tibet, created the prototype of this presentation, the lam-rim, in the eleventh century.

Atisha’s prototype presented a method through which everyone could develop themselves toward the state of a Buddha. Just to read sutras randomly doesn’t necessarily give us a clear spiritual path of where to start, or how to achieve enlightenment. All of the material is there, but it’s not easy to put it all together.

This is exactly what the lam-rim does, by presenting the material in a graded order. After Atisha, there have been many different, more elaborate versions written in Tibet. We’ll be looking at the version written in the fifteenth century by Tsongkhapa, which constitutes possibly the largest elaboration of the material. An outstanding feature of Tsongkhapa’s work is that it includes quotations from the sutras and Indian commentaries, so we can be confident that he isn’t just making anything up.

Another outstanding feature is that Tsongkhapa provides very elaborate, logical demonstrations of all the various points, so that we gain an even stronger confidence in the validity of the teachings based on logic and reason. Tsongkhapa’s special characteristic was that, unlike previous authors who tended to skip over the most difficult points, he would focus on them.

Of the four Tibetan Buddhist traditions, what originated with Tsongkhapa is known as the “Gelugpa” tradition.

What Is the Meaning of a Spiritual Path, and How to Structure It?

The question really is, how to structure a spiritual path? Many different methods were taught in general in India. Methods for developing concentration, for instance, were common in all of the other Indian traditions at Buddha’s time. It’s not something he discovered or made up. Everyone agreed that we need to look at how we can bring concentration and all the other facets into our spiritual path with regard to how we develop ourselves.

The term given to this literature is lam-rim, with “lam” translated as “path”, and “rim” refers to the graded stages of this path. This path is the various states of mind that we need to develop, in a graded order, to reach our goal. It’s just like when we travel; if we want to go overland from Romania to India, then India is our ultimate goal. But first of all, we might need to go through Turkey, Iran and so forth, before we eventually reach India.