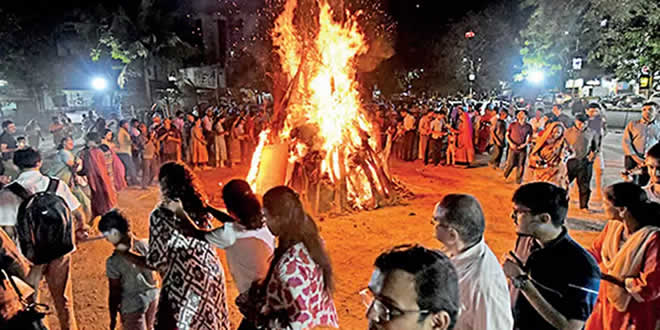 What are Holika Dahan Celebrations?

On the eve of Holi, Holika Dahan takes place. Effigy of Holika, the devil minded sister of demon King Hiranyakashyap is placed in the wood and burnt. For, Holika tried to kill Hiranyakashyap’s son Prahlad, an ardent devotee of Lord Narayana. The ritual symbolizes the victory of good over evil and also the triumph of a true devotee.

Children also hurl abuses at Holika and pray pranks, as if they still try to chase away Dhundhi who once troubled little ones in the Kingdom of Prithu. Some people also take embers from the fire to their homes to rekindle their own domestic fires.

Holika Dahan: An important ritual that is performed with full fervor on choti Holi

The day is mainly celebrated in the memory of ‘Prahlad’ who depicts the victory of good over evil by defeating his aunt ‘Holika’.

Holika Dahan is a festival celebrated one day before the festival of colors, Holi. It is celebrated as a festival of victory of good over evil and a triumph of a true devotee. There are many legends associated with this festival. One of the most significant legends is the story of Prahlad and his aunt, Holika.

Once there was a demon king, Hrinyakashyap who used to rule the whole earth. He wanted that everyone should worship him and not god. His son Prahlad was an ardent devotee of Lord Narayana. Prahlad worshiped the deity against the wish of his father, Hiranyakashyap. The demon king wanted Prahlad to worship him and not Lord Narayana. But when he did not do so, Hiranyakashyap got seriously annoyed with him and tried several ways to kill him. However, he failed in his every attempt as Lord Vishnu (Narayana) saved his devotee, Prahlad every time. Finally, Hiranyakashyap took help of his sister, Holika. Holika was blessed by a boon which made her immune to fire. So Hiranyapashyap asked Holika to enter a blazing fire with Prahlad in her lap so that he can be killed. Holika sat on a pyre and coaxed young Prahlad to sit in her lap. Prahlad sat in Holika’s lap and started chanting the name of Lord Vishnu. The fire was lit but Prahlad came out of it unharmed with the grace of God. Holika lost her life and burnt to ashes. Actually, she did not know that the boon worked only when she entered the fire alone. Since then the tradition of Holika Dahan has been religiously followed by Hindus across India.

On the eve of Holi (Dulhendi), a pyre is set in a park or an open space in front of a temple. On top of the pyre, two effigies are placed. One is of Holika which is made of combustible material and another is of Prahlad which is made of non-combustible material. The effigies are decorated with colours, cow dungs and coconut. After sunset, the pyre is lit signifying ‘Holika Dahan’. Different things like wheatgrass, gram, stalks from the harvest, coconut and sweets are offered. People gather around the pyre to pay their gratitude. They pray to God to cast away the evil spirits. People also throw gulal at each other. It is considered as a ‘Shagun’ (fortunate ritual). The next morning when the bonfire cools down, people apply its ash to their forehead and smear it on their limbs of the body as a way of purification. If coconuts and other eatables are spared by the fire, they are collected and eaten as Prasad with all faith. The heat of fire also marks the beginning of summer season.

Holika Dahan is famous among the people of Hindu community in India for its great and interesting rituals. The rituals are followed across the country with great zeal and enthusiasm. It is considered as an important Holi pooja which takes place at an auspicious time on the eve of Holi. In some communities like Marwari community, women offer Holi pooja in the afternoon before setting fire to Holika. This is called as ‘Thandi Holi’. This pooja is considered very auspicious for married women as it ensures the well-being of their husbands. The rituals may be different but the significance of the festival is same everywhere.

Previous What is Cultural Significance of Holi?
Next What are Holi Safety Tips?