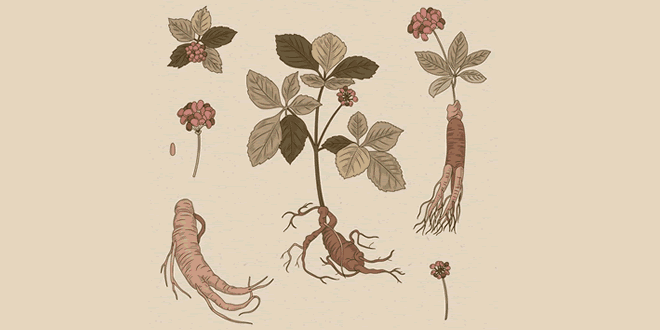 Ginseng: Medicinal Root of Plant: Ginseng refers to species within Panax, a genus of 11 species of slow-growing perennial plants with fleshy roots, in the family Araliaceae. They grow in the Northern Hemisphere in eastern Asia (mostly northern China, Korea, and eastern Siberia), typically in cooler climates; Panax vietnamensis, discovered in Vietnam, is the southernmost ginseng found. This article focuses on the Series Panax ginsengs, which are the adaptogenic herbs, principally Panax ginseng and Panax quinquefolius. Ginseng is characterized by the presence of ginsenosides.

Siberian ginseng (Eleutherococcus senticosus) is not a ginseng at all. It is another adaptogen, but a different species named “Siberian ginseng” as a marketing ploy; instead of a fleshy root, it has a woody root; instead of ginsenosides, eleutherosides are present.

Wild ginseng is ginseng that has not been planted and cultivated domestically, rather it is that which grows naturally and is harvested from wherever it is found to be growing. It is considered to be superior to field farmed ginseng by various authorities, and it has been shown to contain higher levels of ginsenoside. Wild ginseng is relatively rare and even increasingly endangered, due in large part to high demand for the product in recent years, which has led to the wild plants being sought out and harvested faster than new ones can grow (it requires years for a ginseng root to reach maturity). Wild ginseng can be either Asian or American and can be processed to be red ginseng.

As with herbalism in general, ginseng’s medical efficacy remains unproven. It has been difficult to verify the medicinal benefits of ginseng using science, as there are contradictory results from different studies, possibly due to the wide variety and quality of ginseng used in studies. High-quality studies of the effects of ginseng are rare.