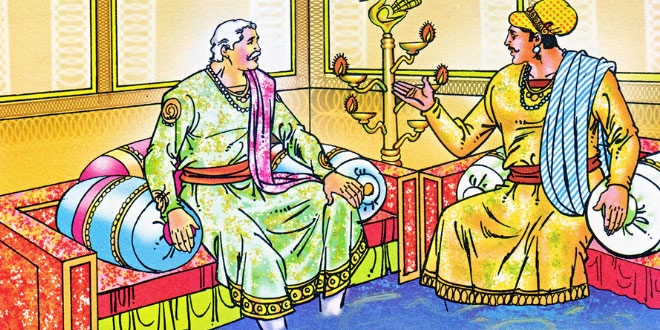 In was rainy season. Yamuna river was running in spate and overflowing. The gushing water was making a loud noise. The Emperor’s palace was situated on the river bank. He was fast asleep.

It was a peaceful night and so, the frightening sound of the roaring river could be heard very clearly.

Wail Of The River: Rib Tickling Take of Akbar-Birbal

Suddenly in the midnight, the Emperor woke up because of the loud roaring sound of the river. He tried again to go back to sleep but the sound of the swirling water was so frightening and loud that he could not go to sleep again.

Finally, he got up and went near the window. Hearing the gushing water, the Emperor thought, – ‘could it be that the river was wailing?’ He thought for a long time but he could not come to any conclusion.

The next morning, when the Emperor came to the court, he asked the courtiers, “Why is the river wailing?” But no one could give a satisfactory answer to it. Then the Emperor sent for Birbal.

When Birbal came, Emperor Akbar asked him the same question. Birbal said, “Your Majesty, I shall be able to answer your question only after listening to the river with my own ears.”

The Emperor agreed, “Well, then tonight, you be in my palace!”

In the night, it was calm and quiet everywhere and the river could be heard weeping. Birbal was with the Emperor in his palace.

Again, the Emperor posed the same question before Birbal. Birbal said, “Your Majesty, the river is going to her husband’s (the sea’s place) from her father (mountain). She is feeling very sad to leave her father’s house and so, she is wailing.”

The Emperor and other courtiers were very pleased with Birbal’s reply.

The Yamuna (यमुना), sometimes called Jamuna or Jumna, is a major river in North India. It is the largest branch of a bigger river called the Ganges. It is 1370 km long. It begins at the Yamunotri, which is in the Himalayas. It goes through the Indian states of Delhi, Haryana, and Uttar Pradesh. At the end, it flows into the Ganges. Rivers that come out of the Yamuna include the Tons (the largest of the ones that come out of it), Chambal, Betwa, and Ken.