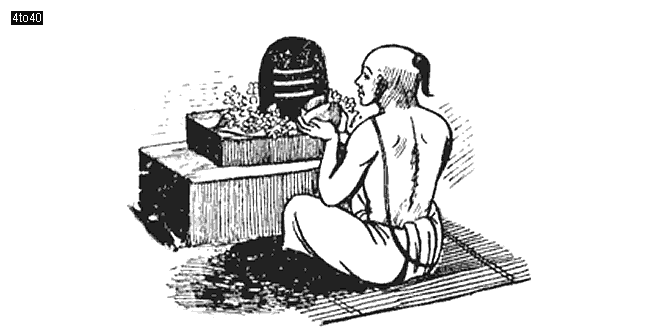 Markandeya: The boy who was always sixteen

There was once a great rishi (Saint) whose name was Mrikandu. Some times he felt very sad since he had no son. So he prayed to God Shiva day and night. At last, Shiva appeared before Mrikandu, and said: “Mrikandu! I am very pleased with your tapas (Prayer). Ask for any boon that you desire.”

“You shall have a son,” said Shiva. “But you must now choose the kind of son you want. Do you wish to have a son perfect in every way, handsome and good and wise, and loved by the entire world, but doomed to be no older than his sixteen year? Or, do you wish to have an ordinary son who will live long, but will be devoid of every virtue? Choose.”

Markandeya: The boy who was always sixteen – N.K. Aggarwal

Mrikandu and his wife were sorrowful: for to choose was not easy. How could they bear their son to die when he was sixteen? Yet how could they bear to have an ordinary son, like any other that come into the world, and had troubles and sufferings, and died at last, without leaving a name behind him? The more they thought, the more the choice puzzled them.

At last Mrikandu said: “O great God, I will have the perfect son.”

Shiva granted the prayer. “You shall have a son who will live only for sixteen years. He will be very wise and virtuous.” With that Shiva disappeared.

So, in due course of time, Marudvati, the wife of Mrikandu, gave birth to a handsome child who shone brightly like the Sun-God himself. The child was named Markandeya. He was wise, and strong, and gentle, and kind. Everyone loved him, and to all gave he love also, spreading happiness wherever he went.

One day Mrikandu looked very sad. His wife too was in tears. Markandeya approached them and asked: “What troubles you that both weep so bitterly?”

“It is for you that we grieve, my son,” said the father. “We got you as a gift from Shiva. But He told us that you would live only for sixteen years. The sixteen years are now coming to an end. What shall we do if you die?”

When Markandeya heard this, he said with great confidence and cheerfulness: “Father, do not weep; do not grieve that I am to die. No, I shall not die. Is not the great God Shiva the conqueror of death? Is He not more powerful than death? To Him then shall I pray to grant me immortality.”

So saying, Markandeya went to the shores of the southern ocean and installed there a Linga of Shiva – a large round black pebble. Bathing thrice – morning, noon and night – he worshiped Shiva. At end of each worship, he sang prayers to the great God. 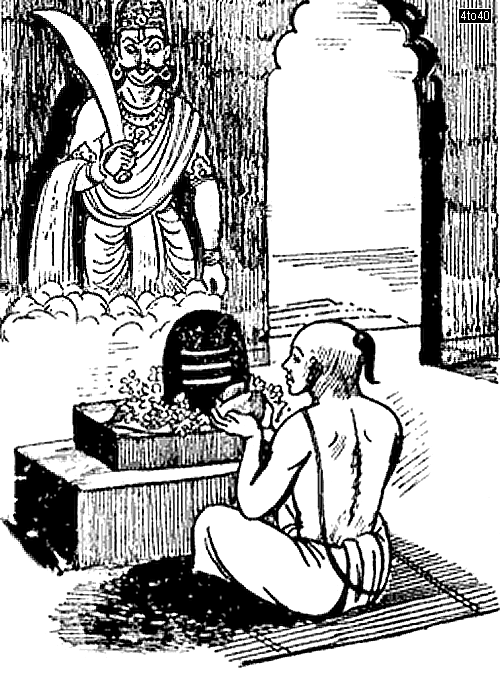 One night, after finishing his worship, Markandeya was about to sing his prayers to the great God Shiva when there stood before him – Yama, the God of Death.

Approaching Markandeya, he cast his noose over the boy’s person. Turning to him, Markandeya said: “Stay; stay for a while. Bear with me while I sing this prayer to Shiva. I will not leave this place before I finish it. Nothing is dearer to me than this prayer; no, not even my life.”

Yama’s eyes turned red with anger. He roared, and said: “Fool! Do you hope to escape from me in this way? Know that countless Brahmans have met with death at my hands.”

Saying this, Yama threw the noose around Markadeya’s neck tried to draw him by force to himself.

At this moment, the Linga burst open and the great Shiva Himself came out of it. Raising His foot, He kicked Yama on his chest and ordered him to go back to his kingdom of death.

“And you shall not return to the world of the-things-that-pass, till I bid you,” said Shiva.

Markandya saw that Yama was defeated. He bowed his head before Shiva and praised Him with heart and soul.

Shiva was pleased with His devotee and made him one of the immortals and then disappeared into Linga.

Markandya came home and his parents were happy to see him come back alive. He told them of the boon that Shiva had granted him and they too blessed their son.

The king of Death too went back to his abode. He could no more send his passengers to the Earth; so everything lived for ever – men and women and beasts and birds and insects were always being born, as before. And all this great burden could the Earth hardly hold.

Then the Goddess of Earth went to the great God and said: “Father, my burden is too heavy for me to bear. My children are too many. There is no room for them all. Send the king of Death to take them to the kingdom of Peace and Forgetfulness and Quite Sleep.”

And the great God said: “I will not; I have spoken.”

Then the tired Earth went to Parvati, the wife of Shiva, and said: “Mother; please help me. See how heavy my burden is. There is no room for all.”

So Parvati went to great God. “The Earth is very full”, she said. “Will you not let the king of Death visit the Earth?”

“No”, said Shiva; “he insulted the Linga, my symbol: he must not return to the Earth. I have spoken.”

“But you know you did say that Markandya was to older than his sixteen year,” said Parvati. “That was why the king of Death came to fetch him.”

And Shiva was silent, not knowing what to answer.

“But you are right, my lord. When you said that, you only meant that he should never look older than his sixteen year, though he might live and live as long as he liked,” said the clever goddess Parvati.

And Shiva thought, for surely here was a way out of a difficulty.

“And poor old king of death was not clever enough to understand this, and wrongly thought that you meant him to take the boy away. It was only his stupidity. Please forgive him.”

And Shiva said: “It shall be as you wish.”

“Then give the message,” said goddess Parvati.

“Lat the old tired leaves fall from trees,” said Shiva the great God and turned to other business.

Hearing this, the messengers of the king of Death were so full of joy that they flew back to the Earth, saying the words wrongly.

And that is why to this day, the messengers of Yama take away to the quite kingdom of Death, old and young, boys and babies, all alike, when the great God of Death wills.