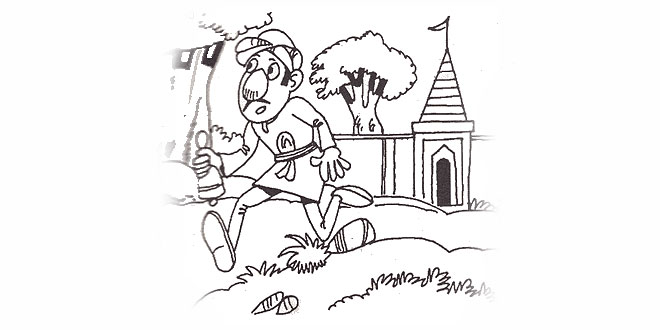 Once upon a time, in the city of Brahmaputra, there lived a thief. One day, he stole a temple bell and ran away into jungle. A tiger, who heard the sound of the bell, was curious to know where the sound was coming from.

When he saw the thief, the tiger pounced upon him and killed him. The bell, fell to the ground. After a few days, a group of monkeys spotted the bell, picked it up and started playing with it. Soon afterwards, the people from the city found the body of the thief and exclaimed, “Surely there is a demon around here who attacks human beings and then rings the bell joyously”.

When the people heard this, they started moving out of the city in panic. Then a brave and intelligent woman thought to herself, “I’m quite sure it’s the monkeys who are hiring that bell.” She boldly went into the jungle and saw some monkeys playing about and ringing the bell.

Then she went to the king and said, “Your Majesty! I’m sure this demon can be overpowered by worshiping the Gods. But this will cost money.” The king, who was only too anxious to get rid of the demon, was prepared to part with a large amount of money.

The woman made a big show of worshiping the Gods. She drew a circle on the ground, placed some fruits inside it and began to worship the God Ganesha. Then she picked up the fruits and went into the jungle.

She kept the fruits under a tree and waited nearby. When the greedy monkeys saw the juicy fruits, they dropped the bell just as she had expected and rushed down to enjoy themselves. She picked up the bell and hastened back to the city. The king was very pleased with her and everyone admired her courage.

Truly, intelligence and courage succeed against all odds.