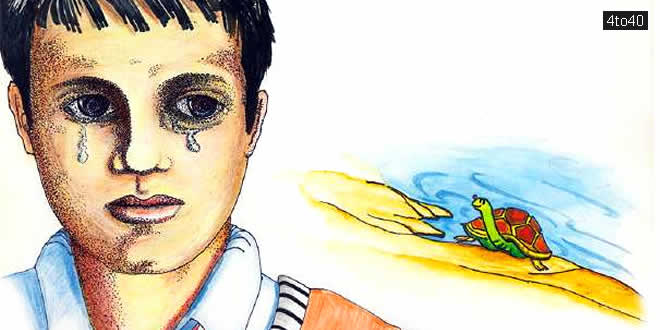 Adventures Of A Magic Turtle: English Short Story – One winter afternoon, a little boy sat below a ‘neem‘ tree, next to a river. He was returning from school, and carried a large bag on his back.

He looked very sad. And as he sat staring at the water, big fat tears started dripping from his eyes creating little round ripples in the pond.

He had only been sitting there for a short while, when he saw a turtle swimming towards him. It was not very big, but it swam slowly.

By the time it reached the shore, the boy had stopped crying, but still looked rather sad. The boy knew that turtles don’t speak or understand human beings, yet he wanted to talk to someone and the turtle seemed the closest creature around.

“Hello, turtle,” said the boy in a sad little voice. “Today my teacher gave me my report card. I’ve not done well, not well at all” sniffed the boy. “My mother will be so upset when she sees the results. I really love my mother, and did not want to make her sad. But now she will be. Maybe, she’ll even be angry. My mother wanted me to do so well in school. Of course I wanted it too, but the tests were so difficult. I know I should have studied earlier, but what will I do now?”

The turtle said nothing. She was listening very patiently as if she understood everything. “Perhaps… maybe I could… I know, I won’t show the marks to my mother. Then she will not be sad. Yes, that is what I’ll do, I’ll just keep quiet.” The boy perked up at the thought of having found a solution to his problem, and with a slightly happier face, got up, and started to go home.

It was then that he heard someone say ‘Will that be the right thing to do?’. The boy stopped and looked around to see who was talking to him. There was no one but the turtle. The boy looked at the turtle carefully. She smiled a lovely smile that seemed to light up her face. Then she said ‘I think you should tell her the truth, and also tell her that you will do better next time.’

The boy was so surprised by the talking turtle that he didn’t know what to say.

The turtle moved a little closer to the puzzled boy, smiled and said, “I know you will do better next time because you want to. What is more, I will help you do better.”

Although it seemed so strange that this turtle was talking, the boy believed her. He was convinced that the turtle would be able to help him. After all, if a turtle could speak like a human, imagine what other marvelous things she could do. He thought about what the turtle had said. Suddenly a thought occurred to him. “Do you know how to read?” he asked.

“No, I don’t,” said the turtle, “but that does not mean that I cannot help you in your studies. Tomorrow, on your way back from school, why don’t you stop by this pond and read your book aloud to me. If you don’t understand something, I will explain it to you. Later, you can play me a song on your flute. I like to hear the flute and you play it very well”.

The boy was no longer surprised that the turtle knew that he played the flute. There was obviously something magical about this turtle.

Having found such a wonderful new friend, the boy did not feel sad any more. He thanked the turtle, said goodbye, and decided to go home and do as the Turtle had suggested. He would show his report card to his mother, and promise to do better next time.

As he turned to walk towards home, the turtle called out and said, ” By the way, my name is Kadam.” The boy smiled and replied, “And I’m Ganesh.” The turtle smiled and said, “I know.”