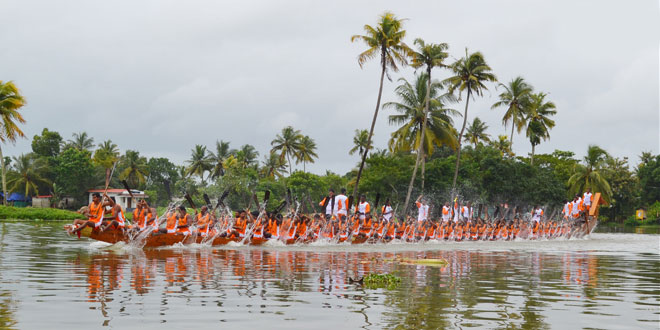 Snake Boat Race, known as Vallamkali in Kerala is the most captivating facet of the festival of Onam. It is also promoted as one of the major tourist attractions in the state and draws a lot of local, national as well as international crowd. Vamakalli or the boat race has now been an integral part of Kerala‘s identity and its popularity has been soaring with each passing year. The credit of its growing popularity can be given to India’s first Prime Minister Pandit Jawahar Lal Nehru who was enamored by this event and in order to encourage it took initiatives to start a national competition for this sport.

There is one interesting story attached with this event. It is said that once upon a time, there was a man named Katoor Mana who offered his daily prayers about 10 kilometers up the river Pamba from Aranmulla. One similar day after completing his worship, he was waiting to feed a poor man in order to complete his worship rituals. When even after waiting for long, he did not get any one; he simply closed his eyes and prayed to Lord Krishna.

As soon as he opened his eyes, he saw a ragged boy standing near him. Katoor became very happy and lovingly offered all the scrumptious items to the boy. To his utter surprise, the boy disappeared after having the meal. He looked for the boy here and there and then spotted him at the Aranmulla Temple but he gain vanished from the spot. Katoor Mana then concluded that he was no ordinary boy but the god himself.

So in on order to commemorate this event, he started bringing food to Aranmulla temple every year during the time of Onam. In order to protect this food from the river pirates, he asked Kovilans or snake boats to accompany him to the place. As this news spread amongst people, more and more people came forward in snake boats to protect him during the voyage. This is how the custom of a grand carnival called Snake Boat Race began. It later took the form of an event on the Onam festival.

Vallamkali boats are not ordinary boats. There is a standard scale to make it. It is about 100 feet long and has a seating capacity of 150 men. It is made up of Anjili (Artocarpus hirsuta), or Kadamb (Naucleacadamba) wood. The boat is designed in a way that its ends are shaped like cobra hoods. This is also the reason that the boats are named Snake Boats. The boats are treated religiously by the local people and thus meticulously crafted by skilled craftsmen with lots of patience and hard work. Only men are allowed to touch this boat and one can enter in to it only of he is bare feet (a token of regard).

The exciting Snakeboat Races take place on the occasion of Onam at the Aranmulla temple. The temple is built on the shores of the river Pamba. The spectacular snakeboats or “chundan vallams” that take part in the race are nearly 30 in number and are owned by the villagers residing in the hamlets bordering the river. The stretch of the race extends from the hills to the low lying plains that measure up to about 40 km.

A community event in itself, the race has the oarsmen dressed in white dhotis and turbans. They steer the boats while singing traditional boat songs to the rhythm of the splashing of their oars in the water. The boats often have a golden lace at the head and the flag and the ornamental umbrella at the center and form an important part of this visual extravaganza. This Snake Boat activity is considered to be much more important and pious than a mere game.

‘Attukal Pongala’ is the most important festival of Attukal Bhagavathy Temple. The offering of Ponkala …