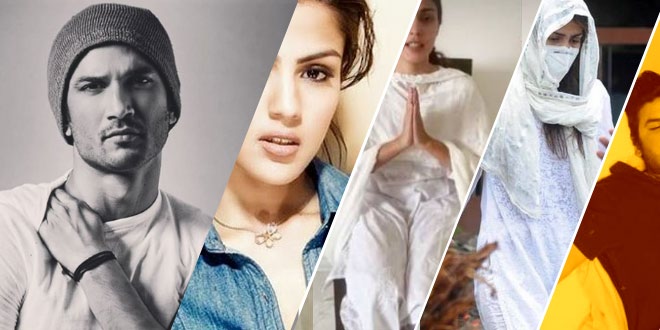 Sushant Singh Rajput revealed to his sister about the plans of ex-partner Rhea Chakraborty to falsely implicate him: Reports

Bihar Police’s affidavit in the Supreme Court has stated that Sushant had told his sister on June 8, the day his girlfriend had left his house, that Rhea will falsely implicate him if he does not do what she says.

The mystery surrounding the tragic and untimely death of 34-year-old actor Sushant Singh Rajput is getting deeper with each passing day. In a shocking revelation made by News 18 journalist Marya Shakil on Twitter, the Bihar police have filed an affidavit in the Supreme Court of India claiming that the late actor had told his sister that his girlfriend Rhea Chakraborty would falsely implicate him if he did not pay heed to her.

Bihar Police files an affidavit in the Apex Court. The affidavit says #SSR told his sister on 8th June (the day Rhea and Sushant stopped all communication as per call records) that #RheaChakraborthy “will falsely implicate” him, if “he didn’t pay heed to her.” #SushantRheaTwist pic.twitter.com/IbmrEnh9kF

CBI files FIR against Rhea Chakraborty and her family members

On the day the Union government handed over the actor Sushant Singh Rajput’s death case to CBI on the request of Bihar police, the Central agency registered an FIR in the case. The FIR named 6 people including Sushant’s former girlfriend Rhea Chakraborty, apart from her mother, father, brother, and two others. It was registered in Delhi in response to a complaint filed by Sushant’s father KK Singh with Bihar police under section 154 of the CrPC. The FIR invoked charges of criminal conspiracy, abetment of suicide, wrongful restrain, wrongful detention, theft, criminal breach of trust, cheating and criminal intimidation.