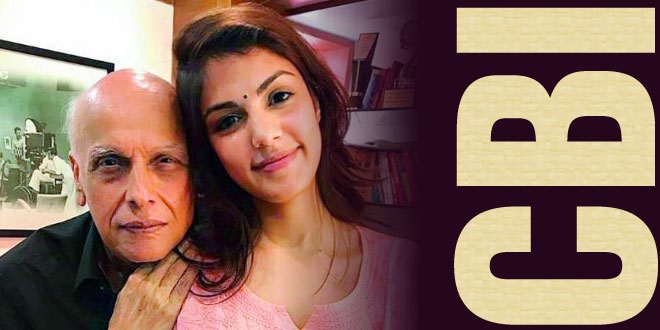 In his FIR against Rhea and her family members, Sushant’s father KK Singh had alleged that Rhea has taken crores from Sushant’s bank accounts, and had also been harassing him emotionally. Rhea’s parents, brother are also named in the CBI FIR.

A month after actor Sushant Singh Rajput’s death on June 14, his former partner Rhea Chakraborty had taken to Twitter to demand a CBI probe into the case. At that time, social media discussions regarding Bollywood’s inherent nepotism culture and Rhea’s links with Mahesh Bhatt were being discussed widely.

“I am Sushant Singh Rajput’s girlfriend Rhea Chakraborty, it is now over a month since his sudden demise. I have complete faith in government, however, in the interest of justice, I request you with folded hands to initiate a CBI inquiry,” Rhea tweeted on July 16. She further added, “I only want to understand what pressures, promoted Sushant to take this step (of alleged suicide).” 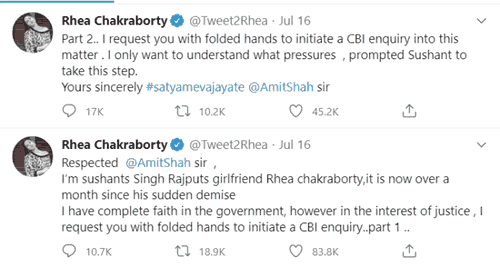 On the day the Union government handed over the investigation of actor Sushant Singh Rajput’s death case to CBI on the request of Bihar police, the Central agency registered an FIR in the case. The FIR named 6 people including Sushant’s former girlfriend Rhea Chakraborty, apart from her mother, father, brother, and two others. It was registered in Delhi in response to a complaint filed by Sushant’s father KK Singh with Bihar police under section 154 of the CrPC. The FIR invoked charges of criminal conspiracy, abetment of suicide, wrongful restrain, wrongful detention, theft, criminal breach of trust, cheating and criminal intimidation.

After the Union Government gave a nod to a CBI probe into the unnatural death of the actor, Rhea Chakraborty has taken a completely contradictory stance. As per an NDTV report, she has criticized the move and dubbed it as ‘illegal’ and against the notion of ‘Federalism’.

The report quoted the actress as saying, “(A CBI investigation) is totally illegal and beyond any known legal principles, affecting the Federal Structure of the Nation. The Bihar Government transferred a case with which it had No Jurisdiction to investigate, to CBI instead of the Mumbai Police.” Rhea Chakraborty, who was earlier vocal about a CBI inquiry is now up in arms against it. 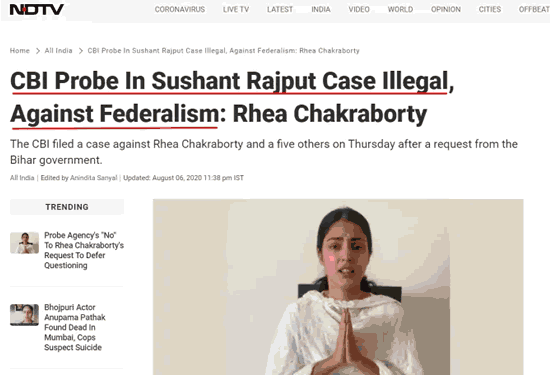 Decoding the change in stance

Her contradictory stance can be attributed to the allegations that have now surfaced against Rhea and her family members about their alleged involvement in pushing the Sushant Singh Rajput to the brink of suicide. In a shocking revelation made by News 18 journalist Marya Shakil on Twitter, the Bihar police have filed an affidavit in the Supreme Court of India claiming that the late actor had told his sister that his girlfriend Rhea Chakraborty would falsely implicate him if he did not pay heed to her.

In his FIR against Rhea and her family members, Sushant’s father KK Singh had alleged that Rhea has taken crores from Sushant’s bank accounts, and had also been harassing him emotionally.

The affidavit further claimed that Rhea Chakraborty and her family were administering an overdose of medicine to the late actor to “grab” his property. It added that she came into contact with the late actor for the sole purpose of usurping his money and later falsely projecting him as a victim of mental illness.