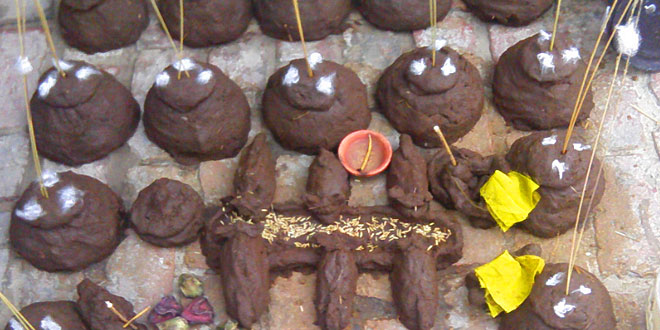 The day is to worship Govardhan mountain which is said to have saved its’ inhabitants from incessant rains. It symbolizes the importance of nature in our lives.

The festival is also known as “Bali Padyami”. On this day King Bali who was killed by Lord Rama would come out of Patala Loka and rule Bhuloka as per the boon given by Lord Vishnu.

According to Hindu mythology the people of Gokul used to celebrate a festival in honour of Indra Dev (the lord of rain). And they worshiped Indra Dev at the end of every monsoon. But one particular year the young Krishna stopped them from offering prayers to Lord Indra who in terrific anger sent a deluge to submerge Gokul. People were afraid that the downpour was a result of their neglect of Indra. But Krishna assured them that no harm would fall them. He lifted Mount Govardhan with his little finger and sheltered men and animals from the rain. This gave him the nick-name Govardhandhari. After this, Indra accepted the supremacy of Lord Krishna.

This day is also known as Vijaya Dasami, because of the victory of Ram over Ravana. On this day in Satya Yug, Ram (the eighth incarnation of Lord Vishnu), killed the great demon and king of Lanka, Ravan. Puranas also opined that on this day warrior Goddess Durga defeated and killed the buffalo demon Mahishasura.

Govardhan is situated 26 km west of Mathura on the state highway to Deeg. A famous place of Hindu pilgrimage, Govardhan is located on a narrow sandstone hill known as Giriraj which is about 8 km in length. On this day people of Punjab, Haryana, Uttar Pradesh and Bihar build a shape of mountain with the help of cow dung and decorate them with flowers and then worship them.

This day is also observed as Annakoot meaning mountain of food. Pious people keep awake the whole night and cook fifty-six (or 108) different types of food for the bhog (the offering of food) also known as Chhappan Bhog to Krishna. In temples especially in Mathura and Nathadwara, the deities are given milk bath, dressed in shining attires with ornaments of dazzling diamonds, pearls, rubies and other precious stones. After the prayers and traditional worship innumerable varieties of delicious sweets are ceremoniously raised in the form of a mountain before the deities as “Bhog” and then the devotees approach the Mountain of Food and take Prasad from it. The offering of food to God on this day of Diwali is a reminder to Hindus of the importance of food and it is a time for being thankful to God for the bounty of nature.