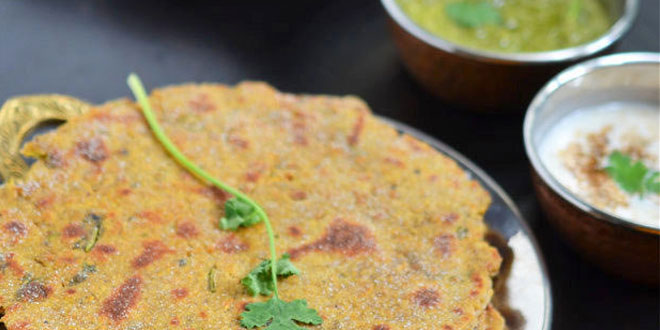 Navratri Fast: Vrat Procedure For Households – Navratri literally means ‘nine nights’ and during these nine days which mark the celebration of Durga Puja in India, different incarnations of the Goddess Shakti, Adi Shakti, or the original creator, observer and destroyer of the universe, are worshiped. The festival is an integral part of the Hindu tradition and different regions in the country follow different rituals to perform puja on this auspicious occasion. While in Eastern India, in the last five days of Navratri the Goddess Shakti is worshiped in the form of Durga, in the Northern and Western parts of India people worship nine different embodiment of the Adi Shakti. Observing Navratri fasts during this sacred occasion is considered highly sacred, as it is a popular belief that the pleased deities grant the wishes of their devotees. Fasting has always been an indispensable part of Indian festivities and even science has attested to its benefits. If you are curious about the correct procedure to perform the Navratri vrat or want to know the various elements associated with it, please read on.

The festive season of Navratri begins on the first day of Ashvin, the seventh month of the lunisolar Hindu calendar. As the month falls in the season of Sharad (early autumn), it is also called the Sharad Navratri.

The festivities begin by performing the Ghata Pratipada or Ghatasthapana, where a pot is placed in a hallowed corner and a lamp is lit inside the pot, which is kept alighted throughout the nine days days. The followers then offer prayers and chant mantras to appease Shailaputri Maa, who is among the first of the Navrupas of the Devi to be worshiped. The deity is draped in a grey saree while devotees preferably clad themselves in yellow. The day is concluded with evening aarti, where devotees gather to sing bhajans dedicated to the Goddess.

While some of the devotees observe a very stringent form of the fast and abstain from even drinking water or any other fluids, others restrict themselves to one meal a day, generally the lunch. A variety of dishes are prepared using potato, saboodana, singhare ka atta but the use of common salt or other spices is prohibited. Rock salt or Sendha Namak is generally used as a substitute for common salt in the recipes. The elders observing the fast include fruits and juices in their diet and some even consume milk, tea, or coffee. Though over the years the norms for observing the fast have become more flexible, the devotees abstain completely from the consumption of alcohol and non-vegetarian food during these nine days.

For each of the next eight days, a different incarnation of Adi Shakti – Brahmcharñi, Chandraghanta, Kushmanda, Skandamata, Katyayani, Kalratri, Mahagauri and Siddhidatri – are worshiped. Each deity is dressed in a particular colour and the devotees also adorn a particular hue which is considered auspicious for that particular day.

On Dwitiya or the second day of Navratri, Chandra Darshan Brahmacharini Pujan is performed for Devi Brahmcharñi. The second incarnation, dressed in orange is a symbol of elegance, divinity and spirituality. Green is the colour which worshipers choose to wear on this day.

The third incarnation Chandraghanta is worshiped on Tritiya, who is an embodiment of bravery, peace, and serenity. The devotees perform Sindoor Tritiya Chandraghanta Pujan, while adorned in the color, grey. Married women observe the Sindhoor Tritiya Sowbhagya Teej, for the long-life and prosperity of their husbands.

The deity of Kushmanda or the creator of universe is festooned in red on the fourth day and the devotees perform Bhouma Chaturthi pujan donned in orange.

Skandamata is the incarnation of the Supreme Being and is worshiped on Panchami. Decorated in blue, the deity is known to destroy demons and protect her followers. Upang Lalita Vrat Skandamata Pujan is performed on this day when the devotees adorn white to please the Devi.

Shasthi is the day when Katyayani, one of the fiercest forms of Durga is worshiped who adorns yellow attire. Devotees who observe the Saraswati Awahan Katyayani Pujan chose to wear red, a colour that is supposed to be auspicious on this day.

Kaalraatri, the one who destroys evil and ignorance and is also one among the Adi Shakti’s most violent incarnates is worshiped on the seventh day or the Saptami. Though fearsome, she is believed to end the negativity around her believers. While the color blue is considered auspicious for devotees, the deity is adorned in green on this day; both of which are the colors of a peacock. 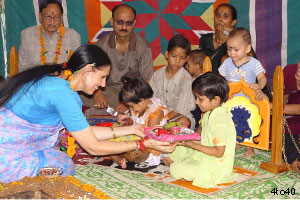 Ashtami or the eighth day of Navratri marks the end of fasting for several devotees. They offer prayers to Mahagauri and perform the Kanchika Pujan, where young girls who are considered a manifestation of the Devi herself are worshiped. The Kanchikaas are served various delicacies such as puris (deep fried Indian bread), halwa (sweet dish made of suji) and Bengal gram curry. The devotees then end the fast by consuming the Prasad.

The Kanchika Pujan marks the end of nine day long ceremonies and on the tenth day the Dussehra or Vijaya Dashami is celebrated to mark the victory of good over evil. Goddess Durga is ceremoniously bid adieu with hopes that happiness and prosperity prevail everywhere with her blessings.

Apart from the religious significance of observing the Navratri Fast, it also has enormous health benefits. It is a means of detoxifying and desalting the body naturally. With our sedentary lifestyles, it has become increasingly difficult to shed off the extra kilos and fasting is a natural way to maintain a healthy body. But like any other weight loss technique caution must be maintained and one should consider all factors before deciding on the right way to fast. These handy tips will help you reap the benefits of fasting during the auspicious occasion of Navratri.

The Fool: Buddha’s Poetry – Siddhartha, who later became known as the Buddha – or …