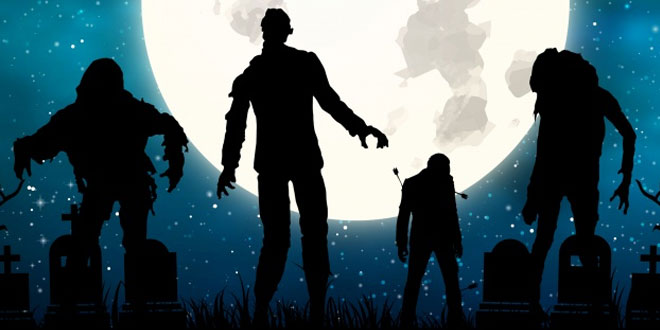 Living Dead is an interesting Halloween trick and is best played out in public. One can really scare the hell out of people by playing this trick intelligently. The key, however, is to make it believable. You need to involve a friend in this trick, who will impersonate the living dead. You are going to have maximum fun by watching the horrified look on people’s faces and enjoying the scary spectacle. It will be great if you already know your audience, as unknown people might not take it sportingly. So, get on with the fun on Halloween and watch out for the mortified look on your victims’ faces.

First, make a crude coffin, without the lid, using plywood or the coffee, with one of the sides open to allow the person in it to breathe. There should be enough space inside it for your friend to be able to lie inside comfortably. Now, your friend should take his / her shoes and socks off and lie inside the box. Cover the feet with fake blood. If there is no cover, you may put a fake gash on the face and pour some fake blood around it too.

Put the coffin inside your truck and make your friend lie on it and drive to the nearest parking area or any public place, where there are a lot of people around. Park your truck, open its tailgate and act as if you are trying to drag the box outside the truck, but it is too heavy for you. Let people see what you are doing. Ask someone to help you and when they do, let them drag the box alone and move aside. When the person is using all his strength in dragging the box, your friend would twitch his feet a little. See, the fright of the person & others around.

There is yet another way to impersonate the living dead. At a camp in the nearby woods, you can add spice to the Halloween Night by asking your friend to wake up everybody in the middle of the night and tell them that you and one of your other friends are missing. After a search ensues, run out of the woods, flailing your arms with fake blood on your whole body and a fake gash on your face, screaming “Candyman!”

Fall down on your stomach. There would be a hook taped on to your back, with blood to cover the tape. Your friend may also come running out about the same time, with one hands folded, as if it has been cut and blood is dripping from it. He would keep on screaming as well and fall down. This would surely scare the hell out of all your friends In fact, the “Living Dead” trick never fails to frighten or scare the victims.