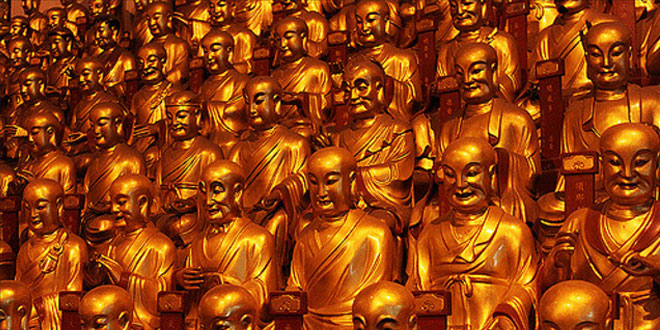 Buddhism is a philosophy of life expounded by Gautama Buddha (“Buddha” means “enlightened one”), who lived and taught in northern India in the 6th Century B.C. The Buddha was not a god and the philosophy of Buddhism does not entail any theistic world-view. The teachings of the Buddha are aimed solely to liberate sentient beings from suffering.

The Basic Teachings of Buddha which are core of Buddhism are:

In Buddhism, the law of karma, says “for every event that occurs, there will follow another event whose existence was caused by the first, and this second event will be pleasant or unpleasant according as its cause was skillful or unskillful.” Therefore, the law of Karma teaches that responsibility for unskillful actions is born by the person who commits them.

After his enlightenment, he went to the Deer Park near the holy city of Benares and shared his new understanding with five holy men. They understood immediately and became his disciples. This marked the beginning of the Buddhist community. For the next forty-five years, the Buddha and his disciples went from place to place in India spreading the Dharma, his teachings. Their compassion knew no bounds, they helped everyone along the way, beggars, kings and slave girls. At night, they would sleep where they were; when hungry they would ask for a little food.

Whenever the Buddha went, he won the hearts of the people because he dealt with their true feelings. He advised them not to accept his words on blind faith, but to decide for themselves whether his teachings are right or wrong, then follow them. He encouraged everyone to have compassion for each other and develop their own virtue, “You should do your own work, for I can teach only the way.”

Once the Buddha and Ananda visited a monastery where a monk was suffering from a contagious disease. The poor man lay in a mess with no one looking after him. The Buddha himself washed the sick monk and placed him on a new bed. Afterwards, he admonished the other monks. “Monks, you have neither mother nor father to look after you. If you do not look after each other, who will look after you? Whoever serves the sick and suffering, serves me.”

The last three are known as Samadhi or Meditation.

However, there are many sects of Buddhism and there are different kinds of Buddhist monks all over the world. The life and customs of Buddhist monks are not only different and unique but consists of a spiritual meaning and their daily life follows a strict schedule that revolves around meditation, study of scriptures, and taking apart in the ceremonies. There are Buddhist shrines, Buddhist monasteries, where monks live, Gompas and Buddhist Stupas all over the world. However, Tibet is perhaps the only Buddhist country which has Dalai Lama, the Buddhist monk and a spiritual leader, as its political leader too. All monks have special uniform called robes, the color of which can tell you about his status in the monastery such as the brownish orange robe is the color of wise, elderly monks.

Though originated in northern India, Emperor Ashoka helped to spread Buddhism into South East Asian counties such as Sri Lanka, Burma, Thailand and Indo-China, from where it moved on to influence people in the Himalayan kingdoms of Sikkim, Bhutan, Nepal, Tibet, Mongolia, Central Asia along with China, Korea, Vietnam and Japan. Today, Thailand has 95% of Buddhist population, the highest in the world with Cambodia, Burma, Bhutan, Sri Lanka, Tibet, Laos, Vietnam, Japan, Macau and Taiwan following soon behind.

Devotees reaffirm their faith in the five principles called Panchsheel: