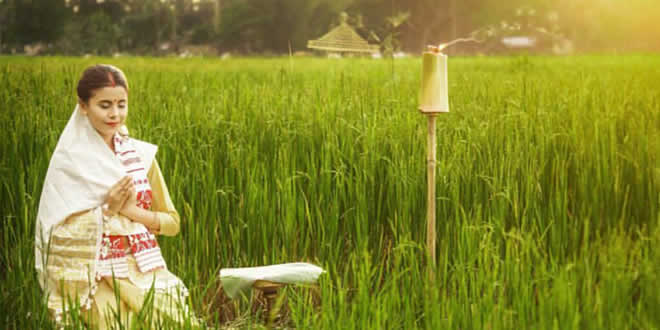 The festival of Bihu, celebrated three times in a year, is the most important festival for the people of Assam state of India. Each of these Bihus represents a different and unique phase, not only of the harvest cycle in Assam but also a unique facet that is particular only to that very festival. The celebrations begin with Rongali Bihu, also known as Bohag Bihu, which is equivalent to the New Year celebrated in many states in the month of March or April according to the Hindi calendar. Rongali Bihu, which generally falls in the middle of the month of April, is the most popular of all the Bihus and signifies the beginning of not only the New Year but also of a new harvest cycle. The traditional food called Pitha Larus (made of Coconut and Rice) and Jolpan, cleaning up and wearing new set of clothes, and worshiping the cows and idols of Gods for blessings and prosperity in the year ahead is all a part of Rongali Bihu.

It’s the Kongali Bihu, also known as Kati Bihu, which follows next and it generally falls in the middle of the month of October. At this time of the year, the paddy crops are in the growing stage and the granaries of the farmers are almost exhausted. The atmosphere of festivity that prevails on this day is relaxed and laid-back, and there is comparatively less merriment and a sense of solemnity and constraint prevails. Also, as a ritual, people light up earthen lamps and set them at the foot of the tulsi plants (also called holy basil) that are planted almost in all of the houses. Farmers also whirl up bamboo sticks in the middle of the paddy fields, chanting Rowa Khowa to ward off pests and the evil eye from the fields. Then in the evening, Pitha is fed to the cattle. Another practice that takes place on this day is the lighting of Akaxbonti lamps at the tip a bamboo pole, which is believed to provide a way to the souls of the dead to find their way to the heaven.

Finally, the harvesting season comes to an end in the month of January, as in the mid of it Magh Bihu or Bhogali Bihu is celebrated to mark the end of it. Its significance is same as that of festivals like Makar Sakranti or Pongal. Magh Bihu is important especially for the people belonging to the agrarian community. On the eve of the day, people set up the Meji and temporary hut-like structures made up of hay. These hut-like structures are called Bhelaghars and it is around them that various communities spend the night feasting, exchanging gifts and greetings, and singing Bihu songs and playing dhols. In the morning, after taking a bath, people burn these huts while praying to the God of fire to mark the end of the harvest cycle. The burnt firewood is then brought back and thrown among the fruit trees for favorable results.