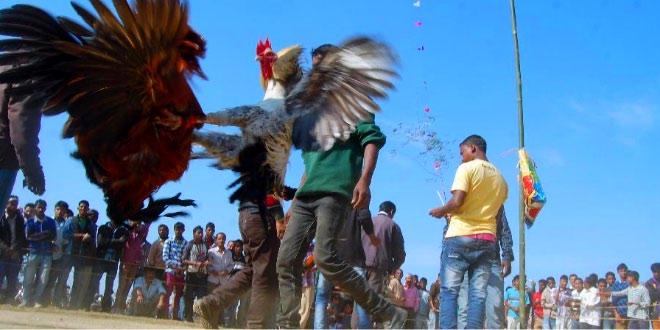 Assam is gearing up to celebrate Bhogali Bihu or Magh Bihu, the festival of feasts.

Although the Assamese month of Magh will start very soon, the festival begins on Uruka, with a grand feast on Thursday night and lighting of the Meji (bonfire made of bamboo and straw) on Friday, which is the Sankranti or the last day of the month of Puh.

Young people make Bhelaghar (makeshift thatched houses) on fields near the Meji. After enjoying Uruka, they light the Mejis the next morning after taking bath.

Bhogali Bihu marks the harvest festival and the celebration continues for more than a week.

Magh Bihu is basically about food. Traditional food items like laru (coconut or sesame laddoos), pitha (rice cakes), and flattened rice with curd are served to guests during the festival.

Markets across the state saw brisk activity since Thursday morning.

People from different walks of life lined up to get the best of fish, meat, milk, curd, cream and eggs.

Guwahati too witnessed rush in most of the markets.

Women prepare for this Bihu for many days. They cook various snacks and sweets, and on Bhogali Bihu day, they carry the food items to the auspicious Meji spot.

Other attractions of Bhogali Bihu are traditional sports, including fights of Bulbul birds at the historical Haigriva Madhav temple at Hajo near Guwahati, buffalo fights of Aahatguri in Morigaon district and cock fights in different places.

The Bulbul fights and buffalo fights will, however, not be held this year as the district administrations has banned the traditional fights honoring a Supreme Court judgment of 2015.

“It’s a historical and cultural legacy of the people of Hajo to organise Bulbul fights. However, we would not be able to hold the event this year as there was a ban by the Supreme Court,” said Shiva Prasad Sarma, the doloi (head administrator) of the Haigriva Madhav temple.