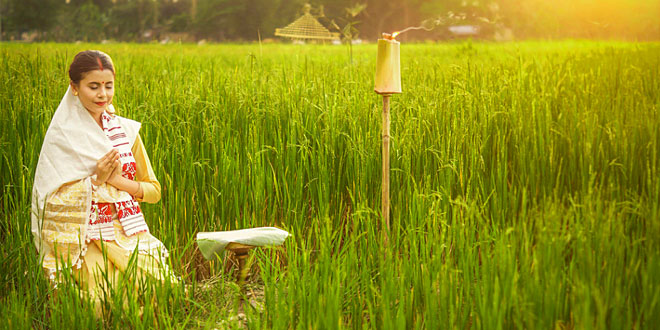 Kongali Bihu is also known as Kati Bihu as it falls on the Assamese month of Kati. It falls in mid-October and is the Bihu of less merriment. This Bihu is characterized with a feeling of solemnity as the granaries are almost empty during this season. On this Bihu, people light earthen lamps in front of tulsi plant, the granary, garden and the paddy fields. The cattle are also fed with pithas.

Kati or Kongali Bihu has a different flavor as there is less merriment and the atmosphere has a sense of constrain and solemnity. People worship the deities for a rich harvest; it is dedicated to the worship of Goddess Lakshmi who is the dispenser of wealth to mortals. Kati Bihu marks the completion of sowing and transplanting of paddies.

In the evenings, offerings are made to the ‘Tulsi‘ plant. Little earthen lamps (Diyas) are lighted at its feet and puja rituals are offered to God for improvement in crops and their yield. The significance of this Bihu is more in the villages, where farmers go to their respective fields and light “Akash-Banti” or ‘sky-lamp on the tip of a bamboo pole to show the souls of the dead the way to heaven. Sacred to the Hindus, the tulsi (basil) tree is planted or pruned in the courtyard of each household and for the whole Assamese month of Kati, people worship the Tulsi plant with an earthen lamp.

Kongali Bihu or Kati Bihu falls right in the middle, when sowing of crops and fertilization process has been taken care of and the harvest season is yet to announce itself. On one hand, Rongali Bihu and Bhogali Bihu are celebrated to mark the arrival and end of the harvest season respectively. Kongali Bihu on the other hand comes at a time when the granaries of the farmers are empty and there’s nothing much to do but tend to the growing crops. It’s derived from the word “Kongal”, meaning Poor, for there is not much to eat around this time of the year. For this reason, Kongali Bihu, celebrated in the month of October, has an altogether different essence to it when compared to the other two Bihus. Though with much less fanfare and merrymaking, the dedication of people towards this festival manifests itself with a quiet but a flaming spirit with which it is celebrated. The reverence, in no way is less, even if the splendor of festivities is not there to seal the day. The significance of this Bihu, however, is more in the villages than in towns.

On the day of Kongali Bihu, none other than Goddess Laxmi, who’s considered the distributor of wealth to the mortal souls, is worshipped and welcomed into homes. Then in the evening, earthen lamps called sakis are lit at the foot of the Tulsi (basil) plant, which is considered sacred and auspicious according to Hindu religion and culture. Offerings are made to it in every household; moving on to lighting more earthen lamps in the granaries, gardens and the paddy fields; prayers are offered for an opulent crop. These lamps, along with whirling of bamboo sticks while reciting Rowa Khowa chants, is believed to keep the pests and evil eyes off the crops and promote a bountiful harvest. Also during the evening, the cattle are specifically fed with rice cakes known as Pitha, and another practice of lighting the Akaxbonti lamps (sky lamps) at the tip of the bamboo pole takes place. This ritualistic activity is believed to show the way to the souls of the dead to the heavens. After the ceremonial activity of lighting these lamps, people visit each other’s houses and exchange greetings and sweets.

Bihu is the biggest festival celebrated in the state of Assam and easily one of the most colorful festivals of India which is celebrated with great fervor and zeal. This festival depends upon the crop cycle of paddy in Assam. Bihu is divided into three broad types depending on the time of the year during which it is celebrated and these three types of Bihus have its own significance. The first Bihu – Rongali Bihu, observed during the month of April, marks the beginning of the Assamese New Year and the sowing season of the paddy crop. The second Bihu – Kongali Bihu, celebrated during October, is less of a celebratory Bihu and more of worshiping is done during this festival. The last type of Bihu is the Bhogali Bihu which is celebrated as the harvest festival of the state and is falls during the month of January.

A number of activities take place during all the Bihus, the Bihu dance being the prime activity of the festival. However, during Kongali Bihu, there are minimal activities and Bihu dance is not performed during this festival; rather worships and other such rites take place. People refrain themselves from pleasures, as during this Bihu the granaries are empty and the atmosphere is of abstinence and self control. This makes the festival a wholesome festival as it not only celebrates the high points in life but also has in its core the respect for those days when life isn’t that easy. Another activity which takes place during Kongali Bihu is the lighting of Akaxbonti which literally means sky lamps. Lighting these sky lamps is a symbolic ritual of showing the path to heaven to the ancestors who come to earth to bless their descendants during this thin time. These lamps are lighted on high bamboo sticks and are lined in a symmetrical row giving it a look of a path of light.

The Kongali Bihu is related to penance and during this Bihu the Assamese peasants pray to the ancestors and gods to keep away the evil spirits and bless them with a healthy yield.

Bihus, the major festivals of Assam, are celebrated with great jest and zeal and the spirit of the people is at an all time high with the whole state coming together to make merry. It is a unique festival because it surpasses the barriers of caste, religion and class and people from all strata of life gather together to celebrate this colorful event. There are three types of Bihu which take place in Assam, namely, Bhogali Bihu, Rongali Bihu and Kongali Bihu. All the three Bihus are celebrated at different phases of the life cycle of paddy crop. The first Bihu, which is the Rongali Bihu, is celebrated during the month of April and denotes the sowing season of the rice crop. The second one, which is Kongali Bihu, also known as Kati Bahu, signifies the season of relocation of the rice saplings. During this festival, the granaries of the farmers are empty, and so the name ‘Kongali’, which means poverty. The last one, which is Bhogali Bihu, is celebrated during the month of January and it marks the harvesting season of the paddy crops.

Each Bihu is significant in its own unique manner. The first Bihu, the Rongali Bihu, signifies the beginning of the New Year along with the arrival of spring season. The Second Bihu, which is the Kati Bihu or Kongali Bihu, signifies the relocation of the rice crop, which is an important phase in the life of the paddy crop. Hence, the farmers light lamps at the foot of the Tulsi plant at their home and whirl a piece of bamboo in the fields and recite rowa-khowa chants to ward off the evil spirits and the pests. This day is also considered auspicious because it is believed that the spirits of the ancestors visit to give blessings, and so the Assamese peasants light lamps called Akaxbonti on top of bamboo sticks to show these spirits the path to heaven.