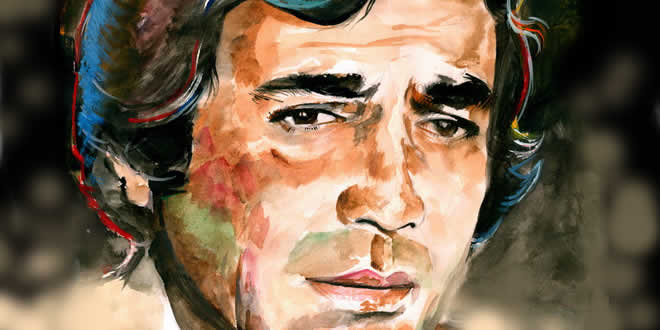 Rajesh Khanna — The rise of Rajesh Khanna on the horizon of Hindi Cinema was no less spectacular than a meteor. The years between 1969 and 1972 saw the Rajesh Khanna phenomenon sweeping Bollywood off its feet. The madness and hysteria which he generated was unparalleled in Indian cinema. With one hit after another, Rajesh Khanna was elevated to the position of God. He was undoubtedly Hindi cinema’s first superstar. 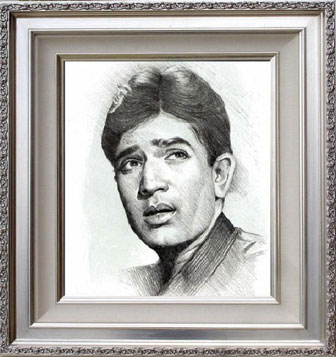 Rajesh Khanna’ rise to stardom was dramatic. He was born as Jatin Khanna and was adopted son of his parents. Initially he worked in theater and was selected by the United Producers Talent Contest. Rajesh Khanna could not make mark in some of his earlier films but with the release of “Aradhana” (1969), he started weaving magic on the audience of Hindi cinema. Released in November 1969, Aradhana made Rajesh Khanna a star. His mannerisms found instant favor with the audience. In addition, super hit numbers like Mere Sapnon ki Rani, Kora Kaagaz Tha Yeh Man Mera, Roop Tera Mastana, Gun Guna Rahe Hain Bhawarein and Baaghon Mein Bahar Hai made him more popular. A few months later, “Do Raaste” spun the same magic as “Aradhana” had done.

There was more to Rajesh Khanna than mere mannerisms as he built the image of a vulnerable and gentle romantic man. In films like Khamoshi (1969), Safar (1970) and Anand (1970), he came up with sensitive performances straight from the heart. In “Anand”, he, playing the role of a cancer stricken man, probably gave his greatest performance. He proved that “Tragedy is not when actors cry. Tragedy is when audiences cry.” Such was the charisma of Rajesh Khanna that even a guest appearance in films by him created more hysteria than the heroes of the films. In tune with the popularity of Rajesh Khanna, the BBC made “Bombay Superstar”, a film on him!

Rajesh Khanna’s most popular pairings were with Sharmila Tagore and Mumtaz. He formed a dazzling combination with director Shakti Samanta, Music Director R.D. Burman and singer Kishore Kumar resulting in such films like Kati Patang (1970) and Amar Prem (1971). With Hrishikesh Mukherjee, he gave sterling performances in Bawarchi (1972) and Namak Haram (1973).

Like all other good things that come to an end, the magic of Rajesh Khanna also evaporated with the arrival of the next superstar of Hindi cinema, the angry young man, Amitabh Bachchan. Every hero fell to the onslaught of Amitabh Bachchan and Rajesh Khanna was no exception to it. He created sensation in the film industry by marrying Dimple Kapadia, who at 16 was 15 years younger than him! The former couple has two daughters – Twinkle Khanna and Rinkie Khanna. With his film carrier almost over, he entered politics in the 90’s and became a Member of Parliament on Congress ticket. In the mean time, he has also tried his hands at TV with serials like Batwara.