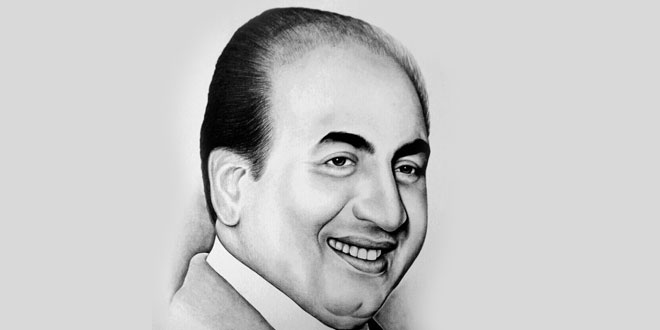 Mohammed Rafi —was a famous playback singer. He was born on 24 December 1924 in Punjab. Even at a young age he was more fond of music than studies.

He started learning music from the famous Hindustani singer Chotte Gulam Ali Khan. Later he became the disciple of Firoze Nizam. When Firoze was appointed as a music director in Lahore Radio Station, Rafi got an opportunity to sing in the radio. It was a turning point in his life.

He sang first for a Punjabi movie. Then in Nazeer Khan’s ‘Leila Majnu’, Rafi began his career as a singer in the Hindi film field. But as a singer he succeeded for his songs in the film ‘Gavom ke gori’. His songs in films like ‘Jugnu’ and ‘Baiju Bavra’ made him very popular. He also used to sing in various other languages. More than 26,000 songs are recorded in his name. Famous music director Naushad and Rafi had a remarkable relationship. Their team work created many hit songs.

He got Padmashree Award in 1965 from India Government and National award twice. He also got Film fare Award for the best singer several times. His last recording was on May 26, 1980. He died on July 31, 1980.

Mohammed Rafi (December 24, 1924 – July 31, 1980) was an Indian playback singer of Hindi cinema, also known as Bollywood. His voice has been referred to as “the most exquisitely pleasant voice with a divine grace and splendor.”

Mohammed Rafi was born on 24 December 1925. He was born at Kotla Sultan Singh, a town near Amritsar in Punjab, to an orthodox Muslim family. His family had shifted from Lahore to Amritsar, during his early childhood. His elder brother Mohammed Hameed was aware of Mohammed Rafi’s love for music and encouraged it. Mohammed Rafi started taking music lessons from Ustad Abdul Wahid Khan and he also learned Indian classical music from Ghulam Ali Khan. One day Rafi and his brother Hameed went to attend a performance by K. L. Saigal. But the legendary singer refused to sing because there was a power failure at the venue. Hamed went up to the organizer to ask whether his brother could sing to keep the audience quiet. That was Rafi’s first public performance, at the age of 13. Among the audience sat noted composer Shyam Sunder, who invited Rafi to Bombay.

Rafi’s first song was in Punjabi for the film Gul Baloch – it was a duet with the singer Zeenat Begum. The song was Soniye nee, Heeriye nee, composed by Shyam Sunder. Shyam Sunder was impressed with his voice and gave Rafi seven songs in another film Bazaar.

In 1944, Rafi decided to move to Bombay, where Naushad gave him a break in Pehle Aap (1944). Rafi sahab’s joy was immense, when Naushad sahab gave him a chance to sing in a chorus for a song that was sung by the Legendry K. L. Saigal. The song was: “Mere sapnon ki rani” from the film “Shahjahan (1946)”. Rafi made his mark with Tera Khilona Toota Balak in Anmol Ghadi (1946). Rafi sahab’s song: Yahan Badla Wafa Ka from the film: Jugnu (1947), was instrumental in the creation of a new superstar of the fifties, the one and only Dilip Kumar, who became a legend in his later years. The film also had songs by Noor Jehan, composed by Feroz Nizami. After listening to his voice, the producer of Amar Raj, J B Wadia, insisted that only Rafi sahab must sing songs for his films.

Rafi has the distinction of being the first playback singer of all times to be featured in the pioneering list of the Guinness Book of World Records, for having sung the highest number of songs, which is a total of 26000 songs, in Hindi and other languages.

Rafi’s first song for late Naushad was Hindustan ke hum hain (We belong to Hindustan) for the film Pehle Aap in 1944. The first hit for the duo was the soundtrack of Anmol Ghadi. At the time, Naushad’s favorite singer was Talat Mahmood. It is reported that once Naushad found Talat smoking during a recording. Annoyed, he hired Rafi to sing for Baiju Bawra. After the Partition of India, Rafi and Naushad decided to remain in India. Whenever Naushad required a male voice in the songs composed by him, he would approach Rafi and nobody else. Naushad used Rafi’s voice for almost all actors of that time including Bharat Bhushan and Dilip Kumar.

O. P. Nayyar used Rafi and Asha Bhosle for most of his songs. Together they created music in the 1950s and 1960s. O. P. Nayyar was once quoted as saying “If there had been no Rafi, there would have been no O. P. Nayyar”. He and Rafi created many songs together including Yeh hai Bombay meri jaan. O P Nayyar was so impressed with Rafi that he got Rafi to sing for singer-actor Kishore Kumar – Man mora baawara for the movie Raagini. The team is also known for the songs picturized on Shammi Kapoor. The song Jawaaniyan yeh mast mast and the title song Yun to humne lakh hansee dekhe hain, tumsa nahin dekha (Although I have seen a lakh beauties, but never saw one like you) of the film Tumsa Nahin Dekha became instant hits. They were followed by hits like Taareef karoon kya uski jisne tumhe banaya (How should I praise the one who created you), He Duniya Usi ki, zamana Usi ka both from Kashmir ki Kali.

Shammi Kapoor himself credited a large part of his success to Rafi. The Shankar-Jaikishan and Rafi team will be remembered for the songs picturized on Rajendra Kumar – Baharon phool barsaao – for which Rafi won the Filmfare Award – and other innumerable hits like Dil Ke Jharokhen ke Mein (Brahmachari), Tumse Achha kaun Hain etc.

Madan Mohan was another composer whose favorite singer was Rafi. They teamed up to produce many ghazals including Teri Aankhon ke Siva, the sad Yeh Duniya Yeh Mehfil and the romantic Tum Jo Mil Gaye Ho. Madan Mohan used Rafi’s voice in many films like Chirag and Laila Majnu.

The composer duo Laxmikant Pyarelal (“L-P”) also used Rafi as their male voice in 1960s and 70s. When L-P were new in the industry, Rafi sang for them, although he was the numero uno singer in Bollywood at that time. They got Rafi to sing for their first hit film Paarasmani. Both Rafi and L-P won the Filmfare Awards for the song Chahoonga main tujhe shaam savere from Dosti. The tune was originally meant to be sung by a female singer, but Majrooh Sultanpuri the lyricist suggested that it would sound better in a male voice, L-P agreed and had the song sung by Rafi.

In 1965, Rafi was honored by the Government of India with the Padma Shri award.

Rafi came back with a host of hit songs in the mid seventies. One of Madan Mohan’s last film Laila Majnu was released on 1976. He used Rafi as the singer for newcomer Rishi Kapur. Tere Dar Pe Aaya Hoon and Barbad-E-Mohabbat Ki Dua were huge hits.

Hits continued, like Pardah hai pardah (Amar Akbar Anthony, 1977) by LP and Pal Do Pal Ka Saath (The Burning Train) by RD. The LP-Anand Bakshi team stuck with Rafi for the song Aadmi Musafir Hain in Apnapan (1978). It was followed by the Rishi Kapur films Sargam (1979) and Karz (1980) which saw LP and Rafi.

Rafi reigned along with Kishore Kumar in the early 80s. The film Dostana was a musical hit and songs like Mere Dost Kissa and Bane Chahe Dushman (with Kishore Kumar ) became very popular. In the film Abdullah, the solo Meine Poochha Chand Se was nominated for the Filmfare Award of that year. Rafi was nominated for three songs in 1980. Rafi continued to produce hit songs like the duet “Kya Dekhte Ho” in Kalyanji Anandji’s Qurbani.

On Friday, July 31, 1980 after composing a song for the movie Aas Paas, Shaam phir kyun udaas hai dost with L-P, Rafi asked “Should I leave?”. L-P were surprised because Rafi had never said anything like this before. While leaving, Rafi said once again “OK. I will leave.” Rafi died at 10.50 p.m. on the same day due to a massive heart attack.

When partition occurred in 1947, Rafi chose to stay in India. Rafi married Bilquis and had four sons and three daughters. He was a religious teetotaller. Once, when a lesser-known composer, Nisar Bazmi (who migrated to Pakistan in early 1960s), did not have enough money to pay him, Rafi charged a fee of one rupee and sang for him. He also helped producers financially. As Laxmikant (of the Laxmikant-Pyarelal duo – L-P ) once observed – “He always gave without thinking of the returns”. It was Rafi who supported L-P during their initial days. Rafi was also famous for his various humanitarian efforts. Rafi and Lata Mangeshkar had a major debate over the issue of royalties in 1960s. Rafi believed that once a recording was over and a singer has been paid, he or she should not ask for more. Lata, on the other hand said that singers should be paid royalties for their works, over and above the amount given for the singing. This led to a fall out between them. They refused to sing songs together. At the insistence of Nargis they finally made up at a stage concert and sang Dil Pukare from the film Jewel thief, composed by S D Burman.

He encouraged and helped other artists all the time by all means including finance. It was he who suggested that Kishore Kumar conduct stage shows when he was in economic difficulties. When Kishore Kumar rose to fame on the strength of the Aradhana songs, originally to have been sung by Rafi, Rafi is reported to have said that “Kishore is singing well and the time is changing”.