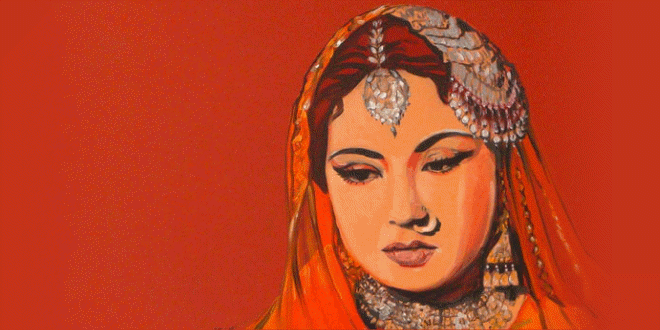 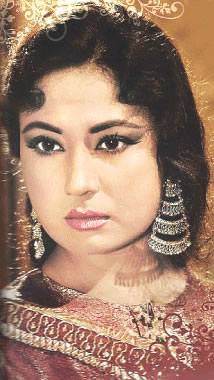 Kumari gained a reputation for playing grief-stricken and tragic roles, and her performances have been praised and reminisced throughout the years. Like one of her best-known roles, Chhoti Bahu, in Sahib Bibi Aur Ghulam (1962), Kumari became addicted to alcohol. Her life and prosperous career were marred by heavy drinking, troubled relationships, an ensuing deteriorating health, and her death from liver cirrhosis in 1972.

Kumari is often cited by media and literary sources as “The Tragedy Queen”, both for her frequent portrayal of sorrowful and dramatic roles in her films and her real-life story.

Meena Kumari was the third daughter of Ali Baksh and Iqbal Begum; Khursheed and Madhu were her two elder sisters. At the time of her birth, her parents were unable to pay the fees of Dr. Gadre, who had delivered her, so her father left her at a Muslim orphanage, however, he picked her up after a few hours.

Her father, a Shia Muslim, was a veteran of Parsi theater, played harmonium, taught music, and wrote Urdu poetry. He played small roles in films like Eid Ka Chand and composed music for films like Shahi Lutere.

Her mother was the second wife of Ali Baksh. Before meeting and then marrying Ali Baksh, she was a stage actress and dancer, under the stage name, Kamini and earlier in her life related to the well known Tagore family of Bengal.

Three weeks after the release of Pakeezah, Meena Kumari became seriously ill, and died on 31 March 1972 of liver cirrhosis. At her death, she was in more or less the same financial circumstance as her parents at the time of her birth: It is said that when she died in a nursing home, there was no money to pay her hospital bills. She was buried at Rahematabad Qabristan located at Narialwadi, Mazgaon, Mumbai.