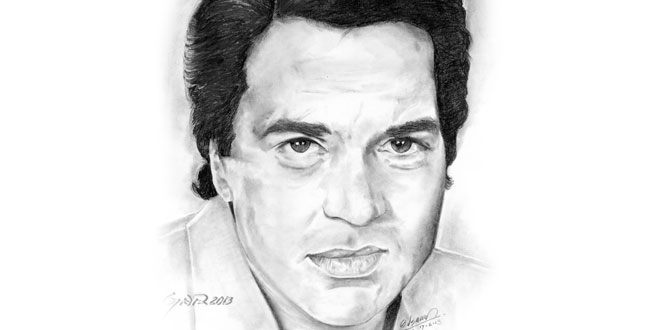 Film star Dharmendra was born at Phagwara in Punjab. He was first noticed in a Filmfare spot- the- talent contest and was signed by Arjun Hingorani for the film “Dil Bhi Tera, Hum Bhi Tere”. At the start of his career Dharmendra was usually cast as a romantic hero. His first major hit film was “Phool Aur Patthar”. Dharmendra also worked in comedy films like “Chupke Chupke”, a masterpiece from Hrishikesh Mukherjee. When action movies became popular in 1970’s he starred as action hero in many such films. Dharmendra’s most memorable role as action hero was in the blockbuster film “Sholay” where he was teamed with Amitabh Bachchan.

Apart from Amitabh Bachchan, no other film star can claim to be equally good in comedy and action as Dharmendra. Dharmendra also ventured into film production and launched his sons Sunny Deol in “Betaab” and Bobby Deol in “Barsaat” as well as his nephew Abhay Deol in “Socha Na Tha”. After a few years hiatus from acting since the early 2000s he is reappearing in films as character actor. His latest films “Metro” and “Apne” have been successful at the box office. Dharmendra also played a Villainious role in his recent released film “Johnny Gaddar”. Dharmendra has married Bollywood actress Hema Malini after converting to Islam. He had to change his religion because he was already married to Prakash Kaur and according to Hindu marriage act one can not marry any other woman till
the first wife is alive.