Uses: The leaves are antibacterial and are used for strengthning the teeth and gums. The fruits and seeds are sweet, acrid, sour, tonic, and cooling, and are used in diabities, diarrhoea and ringworm. The bark is astringent, sweet sour, diuretic, digestive and anthelmintic. 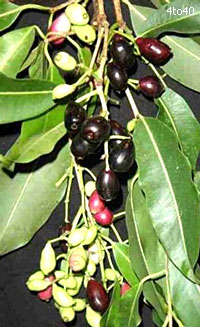 It is also grown in other areas of southern and southeastern Asia including the Philippines, Myanmar, and Afghanistan. The tree was also introduced to Florida, USA in 1911 by the USDA, and is also now commonly planted in Suriname. In Brazil, where it was introduced from India during Portuguese colonization, it has dispersed spontaneously in the wild in some places, as its fruits are eagerly sought by various native birds such as thrushes, tanagers and the Great Kiskadee. Scientific synonyms include Syzygium jambolanum, Eugenia cumini and Eugenia jambolana.

Jamun trees start flowering from March to April. The flowers of Jamun are fragrant and small, about 5 mm in diameter. The fruits develop by May or June and resemble large berries. The fruit is oblong, ovoid, starts green and turns pink to shining crimson black as it matures. A variant of the tree produces white coloured fruit. The fruit has a combination of sweet, mildly sour and astringent flavour and tends to colour the tongue purple. The seed is also used in various alternative healing systems like Ayurveda (to control diabetes, for example.), Unani and Chinese medicine for digestive ailments. The leaves and bark are used for controlling blood pressure and gingivitis. Wine and vinegar are also made from the fruit. It has a high source in vitamin A and vitamin C.

According to Hindu tradition, Rama subsisted on the fruit in the forest for 14 years during his exile from Ayodhya. Because of this, many Hindus regard Jambul as a ‘fruit of the gods,’ especially in Gujarat, India, where it is known locally as jamboon.