Uses: It is Carminative, Antispasmodic, Disphoretic, Ecobolic, Anti Suppurative and Emmenagogue. Gum resin used for treatment of rheumatoid arthiritis. It is a potent drug for cardiac disorders high cholesterol. It is an ingredient for over fifty compounds. 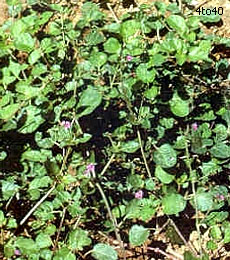 Commiphora wightii (Guggal, Guggul or Mukul myrrh tree) is a flowering plant in the family Burseraceae. The guggul plant may be found from northern Africa to central Asia, but is most common in northern India. It prefers arid and semi-arid climates and is tolerant of poor soil. In Indian languages, it is known by various names like guggul in Hindi, gukkulu and maishakshi in Tamil, guggulu in Sanskrit and Indian bdellium in English.

It is a shrub or small tree, reaching a maximum height of 4 m, with thin papery bark. The branches are thorny. The leaves are simple or trifoliate, the leaflets ovate, 1–5 cm long, 0.5–2.5 cm broad, irregularly toothed. It is gynodioecious, with some plants bearing bisexual and male flowers, and others with female flowers. The individual flowers are red to pink, with four small petals.

The use of plants in the treatment of diseases occupies an important place in Ayurveda, the traditional medicine of India. The Atharva Veda, one of the four well-known Holy Scriptures (Vedas) of the Hindus, is the earliest reference to the medicinal and therapeutic properties of guggul. The plant Commiphora wightii provides oleo gum resin mentioned by Sushruta (3000 year ago) as being a valuable drug. The oleo gum resin commonly known as “gum guggul” or “Indian myrrh” is the economically important product of Indian bdellium. The oleo gum is collected as exudates from woody stem. But Guggal (Commiphora weghtii), as it is locally known, has become so scarce because of its overuse in its two habitats in India where its is found Gujarat and Rajasthan that the World Conservation Union (IUCN) has enlisted it in its Red Data List of endangered species.

Guglipid is derived from the mukul myrrh tree, a small thorny tree 4 to 6 feet tall, that is native to Arabia and India. The tree remains without any foliage for most of the year. It has ash colored bark, and comes off in rough flakes, exposing the underbark, which also peels off. The tree exudes a yellowish resin called gum guggul or guggulu, that has a balsamic odor. This resin is used for medicinal purposes.

Guggul is sought for its gummy resin, which is harvested from the plant’s bark through the process of tapping. In India and Pakistan, guggul is cultivated commercially. The resin of the guggul plant, known as gum guggulu, has a fragrance similar to myrrh and is commonly used in incense and perfumes. It is the same product that was known in Hebrew, ancient Greek and Latin sources as bdellium.

Guggulipid, gugulipid or guglipid is the extract extracted from the sap or resin of Guggal tree also known as mukul myrrh tree (Commiphora mukul) it secretes a resinous material called gum guggul.

Guggul can be purchased in a loosely packed form called Dhoop, an incense from India, which is then burned over hot coals. This produces a fragrant dense smoke. The burning coals which produces the smoke is carried around in different rooms and held in all the corners of the room for a few seconds. This is said to drives away mosquitoes, especially from the dark corners. Some believe it to thus drive away evil spirits as well as remove the evil eye from the home and its family members.