Uses: The plant is acrid, antiinflammatory, anodyne, liver tonic, emetic, diuretic. It is useful in hepatosplenomegaly, dypepsia, constipation, jaundice, halminthiasis, cardiopathy, amenorrhoea. The fresh leaves when chewed have the remarkable property of paralysing the sense of taste for sweet and bitter substance for some time. 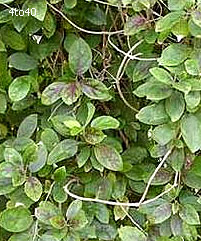 Gymnema comes to us from mainland India and several parts of Africa and has a deep history rooted in Ayurvedic medicine. Currently it is one of the major botanicals being administered for those suffering from diabetes, in boosting insulin levels and controlling healthy blood sugar levels.

Gymnema sylvestre R.Br. is a herb native to the tropical forests of southern and central India where it has been used as a naturopathic treatment for diabetes for nearly two millennia. Meshasringi, Madhinasini or madhoolika, Gurmar, Sirukurinchaan, Amudhapushpam, Chakkarakkolli.

Gymnema sylvestre is a woody climbing plant that grows in the tropical forests of central and southern India. The leaves lamina is ovate, elliptic or ovate-lanceolate, with both surfaces pubescent. The flowers are small bell-shaped yellow color. The leaves of gurmar are used medicinally, for its unique property to directly mask the tongue’s ability to taste sweet foods; at the same time suppresses glucose absorption from the intestine. This is the reason it is known in Hindi as gurmar, or “destroyer of sugar”.

Historically, gymnema sylvestre has been used to treat conditions ranging from malaria to snake bites. Sushruta, the classic book on Ayurveda, describes G. sylvestre, as a destroyer of ‘Madhumeha’ (glycosuria) and other urinary disorders. This herb has been given the name of ‘gur-mar’ meaning ‘sugar-destroying,’ because of its property of abolishing the taste of sugar and “mesbasringi” meaning ‘ram’s horn’ with relation to the shape of its fruits. It has been used in India as a remedy against this condition with success.

The principle active ingredient is Gymnemic acid. The other compounds found were Calcium oxalate, anthraquinone compound, Tartaric acid, cellulose, ash, quercitol but no tannin was found. On further study, when the gymnemic acid was purified and analyzed, it was found not to possess any anti-sacaharine properties; it was not a glucoside.

Use as Herbal Medicine

While it is still being studied, and the effects of the herb are not entirely known, the herb has been shown to reduce blood sugar levels when used for an extended period of time. Additionally, Gymnema reduces the taste of sugar when it is placed in the mouth, thus some use it to fight sugar cravings. From extract of the leaves were isolated glycosides known as Gymnemic acids, which exhibit anti-sweet activity.

This effect, however, is short-lived, lasting a mere fifteen minutes. Some postulate that the herb actually reduces cravings for sugar by blocking sugar receptors in the tongue, but no scientific studies have supported this hypothesis. It is currently being used in an all natural medication for diabetes with other ingredients such as cinnamon, chromium, zinc, biotin, banaba, huckleberry and bitter melon.

The active ingredient is thought to be gurmenic acid which has structure similar to saccharose. Extracts of Gymnema is not only claimed to curb sweet tooths but also for treatment of as varied problems as hyperglycemia, obesity, high cholesterol levels, anemia and digestion. According to the Sushruta of the Ayurveda it helps to treat Madhumeha ie glycosuria.

In 2005, a study made by King’s College, London, United Kingdom, showed that a water-soluble extract of Gymnema Sylvestre, caused reversible increases in intracellular calcium and insulin secretion in mouse and human β-cells when used at a concentration (0.125 mg/ml) without compromising cell viability. Hence forth these data suggest that extracts derived from Gymnema Sylvestre may be useful as therapeutic agents for the stimulation of insulin secretion in individuals with T2DM.