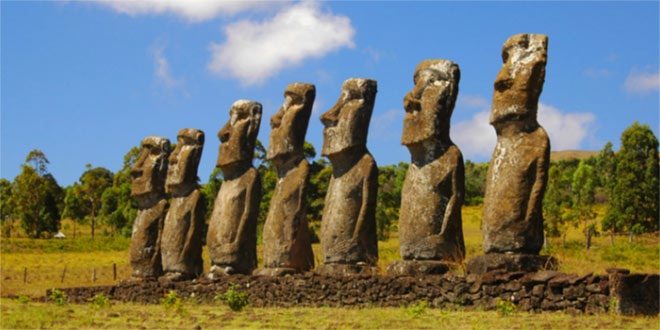 What is the mystery of Easter Island? Easter Island is the eastern-most island of Polynesia, located 3,200 km west of Chile, which annexed it in 1888. The island is called so because it was discovered on Easter Sunday in 1722 by Dutch Admiral Jacob Roggeveen. Its mystery lies in the hundreds of carved stone statues, as high as 12 metres, found on the island, although it was uninhabited when discovered.

Rapa Nui’s mysterious moai statues stand in silence but speak volumes about the achievements of their creators. The stone blocks, carved into head-and-torso figures, average 13 feet (4 meters) tall and 14 tons. The effort to construct these monuments and move them around the island must have been considerable—but no one knows exactly why the Rapa Nui people undertook such a task. Most scholars suspect that the moai were created to honor ancestors, chiefs, or other important personages, However, no written and little oral history exists on the island, so it’s impossible to be certain.

A Polynesian society blossomed in this unlikely locale after hardy souls somehow navigated a fleet of wooden outrigger canoes to this tiny speck in the vastness of the Pacific Ocean. Here, in isolation some 2,300 miles (3,700 kilometers) west of South America and 1,100 miles (1,770 kilometers) from the nearest neighboring island, the Rapa Nui developed a distinct architectural and artistic culture. That culture reached its zenith during the tenth to 16th centuries, when the Rapa Nui carved and erected some 900 moai across the island.

It is generally thought that the Rapa Nui’s demise resulted from an environmental catastrophe of their own making.

It’s not clear when the islands were first settled; estimates range from A.D. 800 to 1200. It’s also not clear how quickly the island ecosystem was wrecked—but a major factor appears to be the cutting of millions of giant palms to clear fields or make fires. It is possible that Polynesian rats, arriving with human settlers, may have eaten enough seeds to help to decimate the trees.

Either way, loss of the trees exposed the island’s rich volcanic soils to serious erosion. When Europeans arrived in 1722, they found the island mostly barren and its inhabitants few.

Today’s tourists are numerous, and most visit the Rano Raraku quarry, which yielded the stones used for almost all of the island’s moai. Rapa Nui’s ancient inhabitants left the quarry in a fascinating condition—it is home to some 400 statues, which appear in all stages of completion.

Meanwhile, across the entire island, many moai are reversing the creation process and deteriorating rapidly from priceless carvings back into plain rock. The volcanic stone is subject to weathering, and intensive conservation efforts are needed to help preserve Rapa Nui’s stone legacy in its present, awe-inspiring state.

Previous How is Easter Celebrated in Bulgaria?
Next Who is the Easter Bunny?