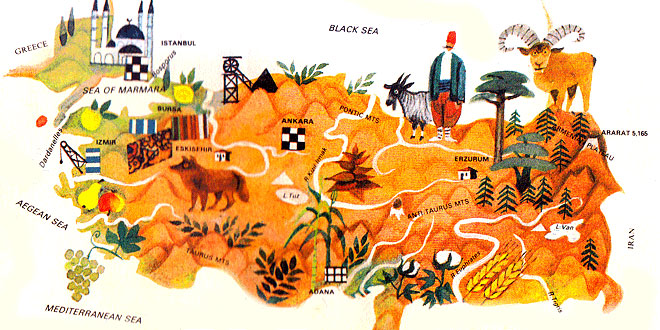 System of government: Republic
Capital: Ankara
Location: Includes the south-western part of the Balkan Peninsula and Asia Minor. The Sea of Marmara and the straits of Bosporus and Dardanelles separate Asian Turkey from Europe. The shores of Turkey are washed by the Mediterranean, Aegean and Black seas. On land, Turkey has borders with Bulgaria, Greece, Syria, Iraq, Iran and the USSR.
Area: 780,576 sq km (about 3% in Europe)
National Composition: Turks (90%), Kurds (7%), some Arabs and others
Religion: Islam
Official Language: Turkish
Currency: Lira = 100 kurus
Administrative Divisions: 67 Provinces
Other Major Cities: Istanbul, Izmir, Adana
Highest Elevation: Ararat (5,165m), an extinct volcano on the Armenian Plateau
Chief Rivers: Euphrates, Murat, Kizil, Gediz
Largest Lakes: Van (mountain lake in the east), Tuz, Beysehir
Climate: Mediterranean on the coast; arid and warm in the interior

The European part of Turkey, known also as Eastern Thrace, is hilly. The interior of the Asian part of Turkey is occupied by the Anatolian Plateau, which is fringed by mountain ranges, namely the Pontic Mountains in the north, the Anti-Taurus and Taurus Ranges in the south and the rugged Armenian Plateau in the east. Turkey has relatively few rivers. They are mostly unsuitable for navigation, but they have high hydroelectric potential owing to the steep gradients of their upper courses.

The Asian interior contains steppes which give way to rocky deserts in places. The coast has a Mediterranean type of vegetation with various evergreen trees and shrubs, plantations of olive trees and vineyards. Although Turkey has a little forest, its wildlife is fairly rich, including antelope, red deer, various rodents and migratory birds. The seas surrounding Turkey abound in fish.

In 1980 agriculture employed 57 percent of the work-force and it accounted for one-fifth of the gross domestic product in 1982. It is mostly concerned with animal husbandry, particularly sheep, goats and cattle. The chief cash crops are barely, maize, and wheat, but cotton, figs, fruit, grapes, olives, poppy seeds, sugarcane and tobacco are also important.

Industry employs only 13 percent of the work-force, but accounts for nearly one-third of the gross domestic product. There are considerable mineral resources, including chromium ore, the chief mineral. There are also sizeable deposits of bauxite, coal, cobalt, copper, iron ore, manganese, molybdenum, oil, rock salt, sulphur, tin, tungsten and zinc. After mining, engineering is the leading industry, manufacturing railway stock, tractors, cars and other items. Food-processing and tobaco, textile and leather industries are also important. 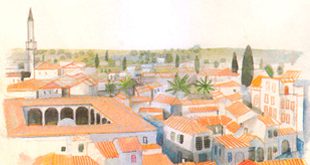