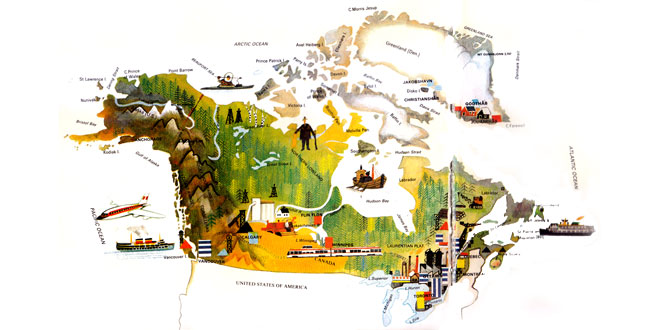 The Canadian coastline is articulated by numerous bays, sounds, peninsulas, islands and archipelagos.

Along the western coast stretch the north-south ranges of the Cordillera, forming a belt as wide as 600 kilometers in places. Closest to the coast lie the Coast Mountains, paralleled farther into the interior by the Rocky Mountains. Between the ranges are high plateaux. East of the mountains stretch the Great Plains, while the eastern part of the country is taken up by the Canadian Shield (Laurentian Highlands) encompassing the vast area of the Hudson Bay region, the lake region, Labrador and the Arctic Lowland. In the south-east the country is penetrated by the Appalachians.

Canada is a country of lakes and rivers. The river flow in abundance and represent an enormous hydroelectric potential. Most Canadian rivers empty into the Atlantic. Rivers of the montane west descend sharply to the coast, forming numerous rapids and waterfalls along the way. Rivers of the Arctic region freeze up for as long as six months each year.

The total area of all Canadian lakes equals that of the whole of France. The best-known Canadian lakes are those of the Great Lakes region: Superior, Huron, Erie and Ontario. Between the latter two lakes lie the scenic Niagara Falls.

The distribution of vegetation and animal life depends on climatic conditions and therefore follows a belt pattern. About 45 per cent of the country is forest and Canada is the world’s largest timber producer.

Canadian agriculture has many features similar to that of the neighboring United States, i.e. large acreages, high-yield specialized production, and maximum mechanization. In crop farming, wheat is the predominant crop and much of it is exported. Very important also are fruit and vegetable farming. Oats, barley, potatoes, sugar beet, oil-seeds, tobacco and flax rank among other leading agricultural crops. However, stock raising surpasses crop farming in importance. Meat and dairy cattle, poultry, fur and fish farming are of major importance, supplemented as they are by sweet water and sea fishing, and fur-trapping.

Canada ranks among the world’s top producers of non-ferrous and precious metals and iron ore. There are vast deposits of gold, silver, uranium, asbestos, bituminous coal, oil and natural gas.

The leading sector of Canada’s advanced industry is engineering, including automobile production and chemistry production (e.g. petro-chemicals and fertilizer). The food-processing industry is traditional and based on Canada’s high-yield agriculture. The country is also the world’s leading producer of paper and pulp, electricity, aluminium, lead, zinc, timber and lubricating oils. Ore smelting, textiles and wood-working are also very productive sectors of the booming Canadian economy.

Canada’s efficient transport system relies on thousands of kilometers of railways concentrated namely in the southern part of the country, and on fast roads and highways. There is a fast Trans-Canadian Highway linking the east with the Pacific seaboard. River and lake shipping is fundamental to the country’s economy, especially along the St Lawrence Seaway, which links the interior with the Atlantic. Since Canada is one of the world’s trading countries, many of the exports and imports are moved by ocean transport. The largest ports are Vancouver, Sept Iles, Montreal, Thunder Bay, Hamilton, Port-Cartier and Halifax. The country’s busiest airports are Toronto, Montreal and Vancouver.

Canada Operates many pipelines to move crude oil and natural gas over considerable distances, especially from fields beyond the Arctic Circle.