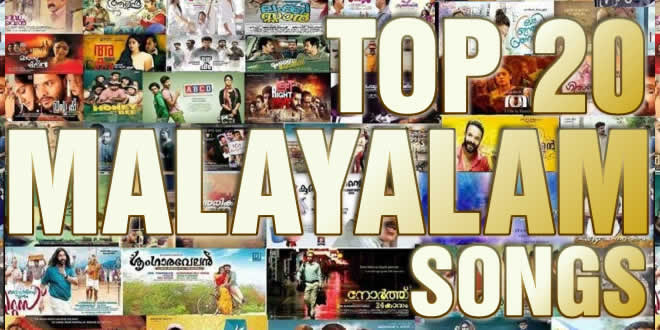 Top 20 Malayalam Songs December 2022: Malayalam cinema is the Indian film industry based in the southern state of Kerala, dedicated to the production of motion pictures in the Malayalam language. It is also known by the nickname Mollywood in various print and online media (a portmanteau of Malayalam and Hollywood). It is the fourth largest film industry in India. The films produced here are known for their cinematography and story-driven realistic plots. Works such as Marana Simhasanam and Vanaprastham were screened in the Un Certain Regard section at the 1999 Cannes Film Festival. Marana Simhasanam garnered the coveted Caméra d’Or (“Golden Camera”) for that year.

In 1982, Elippathayam won the Sutherland Trophy at the London Film Festival, and Most Original Imaginative Film of 1982 by the British Film Institute. Rajiv Anchal’s Guru (1997) and Salim Ahamed’s Adaminte Makan Abu (2011) were Malayalam films sent by India as its official entries for the Best Foreign Language Film category at the Academy Awards. Adoor Gopalakrishnan has won the International Film Critics Prize (FIPRESCI) for his works such as Mukhamukham (1984), Anantaram (1987), Mathilukal (1989), Vidheyan (1993), Kathapurushan (1995), and Nizhalkkuthu (2002).

Other films which achieved global acclaim include Chemmeen (1965), which received a Certificate of Merit at the Chicago International Film Festival, and a Gold Medal at the Cannes Film Festival for Best Cinematography. Piravi (1989) won at least 31 international honors, including the Caméra d’Or – Mention Spéciale at the 1989 Cannes Film Festival, and was screened at the Un Certain Regard. Swaham (1994) won the Bronze Rosa Camuna at the Bergamo Film Meeting in Italy. The first 3D film produced in India, My Dear Kuttichathan (1984), was made in Malayalam. The first CinemaScope film produced in Malayalam was Thacholi Ambu (1978).