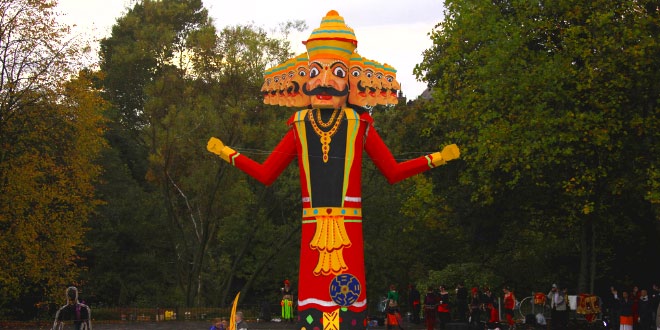 Dussehra or Vijay Dashmi is a very popular Hindu Festival, celebrated with éclat throughout the country. It is observed on the tenth day of the bright half of Ashvina (September-October).

It is a ten-day celebration, during which Ramlila, which is based on the epic story of the Ramayana, is staged at various places in most of the cities and towns in northern India with elaborate rituals. During its performance the Ramayana is constantly recited accompanied by music. It presents a fine blending of music, dance, mime and poetry before an enthusiastic and religious audience sharing every event of the story with the actors.

Struggle between the forces of good and evil, and the eventual victory of good over the evil, is the basic theme of Ramayana. Rama symbolizes the best in humanity and Ravana the evil force. Dussehra in Sanskrit also means “taking away ten sins”. The ten heads of Ravana, represents these ten sins and Rama destroys them. Ravana abducted Sita with the help of another demon named Maricha. Ravana kept Sita in the Ashoka Grove and persisted in making Sita his wife, but Sita always thought of her husband Rama. Rama sent his messengers to Ravana and urged him to return Sita. But the evil Ravana refused to do so. Rama set off for Lanka with Sugriva, Hanuman, Angada, Jambvan and hundreds of other mighty monkeys. Ravana’s younger brother Vibhishana, a noble soul and devotee of God, however, took refuge with Rama. Rama built a causeway in the sea to carry him and his forces across the water.

Rama, along with his young brother Lakshmana, killed all the demons and their king Ravana and regained Sita. Finally they returned to Ayodhya in Vimana Pushpaka.

On this occasion huge effigies stuffed with brilliant fireworks are raised at various open grounds and set fire to by Rama. The effigies belong to Ravana, his brother Kumbhakarna and son Meghnath. This marks the culmination and termination of the celebrations. Elaborate and gay processions depicting various scenes of the Ramayana in the form of tableau are taken out through bazaars and main streets. Apart from all this, Ramlila is also performed as a dance-drama by professional troupes.

Dussehra festival held at Mysore, is one of India’s most colorful phenomena. The spectacular procession taken out on this day is a veritable extravaganza. The colorful Dussehra fair and festival of Kulu is also very famous. Among the Ramalilas, the one staged at Varanasi under the patronage of the local Raja deserves mention. On this auspicious day Lord Rama is worshiped, prayed and meditated upon to obtain his blessings and favor. In old days the kings generally marched their forces on this day against their enemies, the day when Rama routed Ravana.