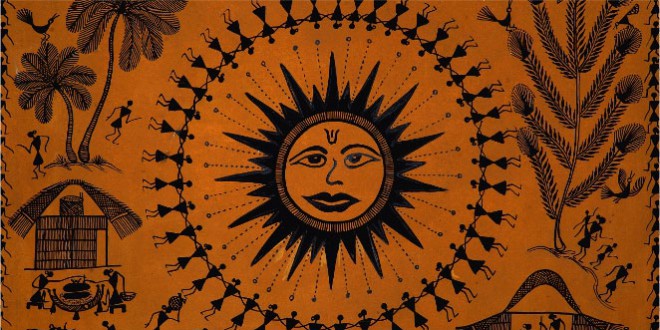 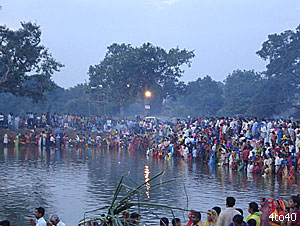 Chhath is a festival dedicated to the Sun God, considered to be a means to thank the sun for bestowing the bounties of life in earth and fulfilling particular wishes. Worship of the sun has been practiced in different parts of India, and the world from time immemorial. Worship of sun has been described in the Rig Veda, the oldest Hindu scriptures, and hymns praying to the sun in the Vedas are found.

In the ancient epic Mahabharata, references to worshiping of the sun by Draupadi, wife of the Pandavas, are found. It was believed that worshiping of the sun would help cure a variety of diseases, including leprosy, and also ensure longevity and prosperity of the family members, friends, and elders. It is also believed that Chhath was started by the great Danveer (alms giver) Karna, sired by the Sun God, who became a great warrior and fought against the Pandavas in the Mahabharata war. 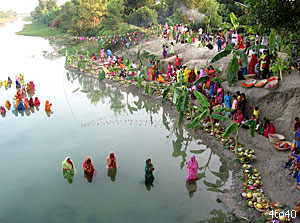 Also called Dala Chhath – it is an ancient and major festival. It is celebrated twice a year: once in the summers (May-July), called the Chaiti Chhath, and once in the winters (September-November)around a week after Deepawali, called the Kartik Chhath. The latter is more popular because winters are the usual festive season in North India, and Chhath being an arduous observance, requiring the worshippers to fast without water for more than 24 hours, is easier to undertake in the Indian winters.

Chhath being mainly a Bihari festival, wherever people from Bihar have migrated, they have taken with them the tradition of Chhath. This is a ritual bathing festival that follows a period of abstinence and ritual segregation of the worshiper from the main household for four days. During this period, the worshiper observes ritual purity, and sleeps on the floor on a single blanket. The main worshipers, called Parvaitin (from Sanskrit parv, meaning ‘occasion’ or ‘festival’), are usually women. However, a large number of men also are the main worshiper. The parvaitin pray for the well-being of their family, for prosperity and offspring. They usually can perform Chhath only if it is passed on to them from their older generation. However, once they decide to do it, it becomes their duty to perform it every year, the festival being skipped only if there happens to be a death in the family that year. 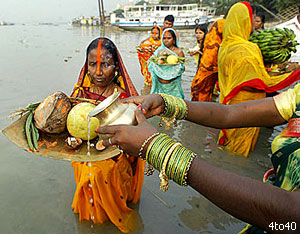 On the eve of Chhath, houses are scrupulously cleaned and so are the surroundings. One the first day of the festival, the worshiper cooks a traditional vegetarian meal and offers it to the Sun God. This day is called Naha-Kha (literally, ‘Bathe and eat’!). The worshiper allows herself / himself only one meal on this day from the preparation.

On the second day, a special ritual, called Kharna, is performed in the evening after Sun down. On this day also, the worshiper eats his / her only meal from the offerings (Prashad) made to the Sun God in this ritual. Friends and family are invited to the household on this day to share the prashad of the ritual. From this day onwards, for the next 36 hours, the worshiper goes on a fast without water. 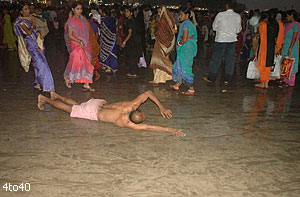 The evening of the next day, the entire household accompanies the worshiper to a ritual bathing and worship of the Sun God, usually on the bank of a river or a common large water body. The occasion is almost a carnival. Besides the main worshiper, there are friends and family, and numerous participants and onlookers, all willing to help and receive the blessings of the worshiper. Ritual rendition of regional folk songs, carried on through oral transmission from mothers and mothers-in-law to daughters and daughters-in-law, are sung on this occasion. The same bathing ritual is repeated on the following day at the crack of dawn. This is when the worshiper breaks his / her fast and finishes the ritual. Chhath being celebrated at the crack of the dawn on a river bank is a beautiful, elating spiritual experience connecting the modern Indian to his ancient cultural roots.

The folk songs sung on the eve of Chhath Puja mirror the culture, social structure, mythology and history of Bihar and Uttar Pradesh. Nowadays, modern Chhath Puja songs, largely Bollywood filmy remixes have caught on, but the old tradition still goes strong with a great degree of sanctity. The three main linguistic regions of Bihar: the Maithili, the Magadhi, and the Bhojpuri, and all the various dialects associated with these, have different folk songs; but all dedicated to Chhath, they have an underlying unity. The minor nuances of the Chhath Puja rituals, such as in the Kharna ritual, vary from region to region, and also across families, but still there is a fundamental similarity.