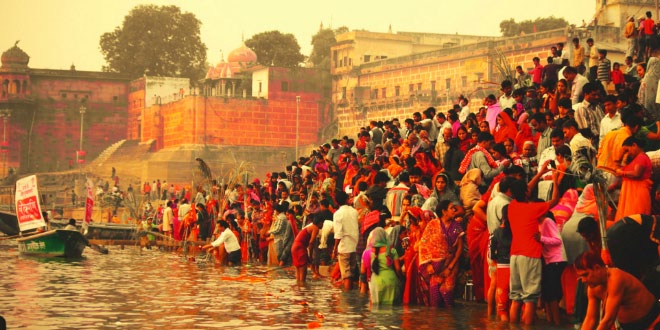 Over a million migrants return to Bihar for Chhath: Bihar is witnessing the return of its natives in droves. A million migrants are back at their villages and towns over the past week or so to celebrate Chhath festival, the biggest community celebration, along with their families and relatives.

According to a conservative estimate, over one million Bihar migrants working across the country as well as abroad have returned home to infuse “new life” into the festivities.

Even Biharis who are rich and famous as well as professionals from different fields have made a beeline for the state for the festival.

Migrants return to Bihar for Chhath

“Most migrants have returned in the last one week while thousands are still on the way. Many failed to make it as there was no place in long-route trains,” a labour department official said.

“We have come to celebrate Chhath with our family, relatives and friends,” said Mukesh Rai, in his mid-40s. He reached the Patna railway station on Monday evening, on way to his village in neighboring Vaishali district.

Mukesh works in a garment export factory in Ludhiana in Punjab.

“After arriving in Patna from virtually every part of India, they are boarding packed buses and trains to reach their villages across the state,” said Bhola Singh, who works as a supervisor in a cement factory in Gujarat.

According to officials at the East Central Railway headquarters at Hajipur near Patna, 1.5 to 2 lakh passengers have been arriving everyday in Bihar from across the country in more than 250 trains since last week to celebrate Chhath.

“All trains from Delhi, Bengaluru, Kolkata, Mumbai, Hyderabad, Chennai, Pune, Chandigarh, Surat and Ahmedabad are packed to capacity, thanks to a huge rush for Chhath,” a railway official said.

The return of thousands of Bihar natives, most of whom are migrant workers outside the state, to rural Bihar has certainly put smiles back on the faces of their old parents, and kith and kin.

Not only this, it also has provided fresh impetus to socio-economic activities. Savings brought along by the migrants has meant their families are spending more on both essentials and fancy goods and thus the state economy is getting a boost, spurred by Chhath purchases.

So, it is not just the families but also traders and shopkeepers in the countryside who are eagerly awaiting the arrival of sons of soil for the Chhath.

The four-day festival devoted to the Sun god began on Sunday and ends on Wednesday morning.

“We are lucky to arrive here. Now we can enjoy Chhath with our family,” a group of migrant workers who returned from Andhra Pradesh said.

Migrants return to Bihar for Chhath: Most migrants from Bihar are concentrated in Punjab, Delhi, Haryana, Assam, Rajasthan and Gujarat. Cities such as Mumbai, Chennai, Bangalore, Kolkata and Pune have a sizable number of people from Bihar.