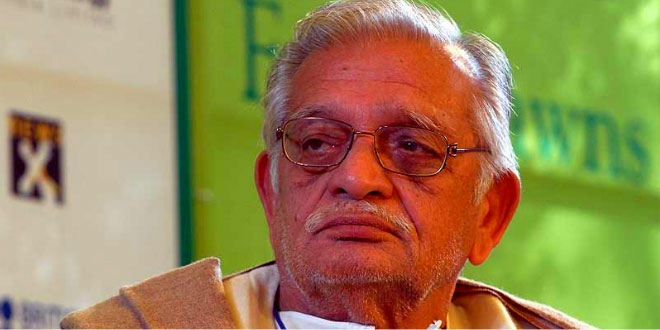 Gulzar Biography For Students And Children

Gulzar was born Sampooran Singh at Deena in Pakistan in the year 1934. After partition in 1947, he came to Delhi. Gulzar started his career as an assistant to celebrated director Bimal Roy and Hrishikesh Mukherjee. He started his career as a lyricist with Bimal Roy’s Bandini. Although his first film to be released was Kabuli Wala, but Bandini is considered to be his first venture. Films like Sannata, Biwi aur Makan, Do Dooni Chaar and most notable of all Khamoshi, followed them. In his book called the Ravi Paar, Gulzar has descriptively documented how it was working and creatively growing with Bimal roy. To know more about Gulzar, continue to read this insightful biography on him.

He got married to the famous Bollywood actress Rakhee but got separated from her a few years after their marriage. They have a daughter together, Meghna Gulzar. Gulzar had recently been awarded the highest award in the world for excellence in commercial art, 81st Academy Award for the category of Best Original Song Jai Ho for the movie Slumdog Millionaire. His song also won a Grammy Award in the year of 2010.

As A Writer: After getting recognition as a sensitive lyricist, he started writing scripts and stories for films.
Then with Mere Apne in 1971, he turned into a role of a Director. In a career spanning 40 years Gulzar has written stories for around 60 films and directed 17 movies, each one a masterpiece. During 1980’s he did one of the most outstanding jobs for the small screen, the serial called Mirza Ghalib, a tribute to the legendary poet. Mirza Ghalib will remain one of the most memorable TV productions for its music, direction, dialogues and portrayal of Ghalib by Naseeruddin Shah. 1996 saw Gulzar back in action, behind the camera for the making of Maachis, a candor document on terrorism in Punjab. The success of Maachis got Gulzar back to the film industry.

In his long career, Gulzar has never sighed away from experiment. Some of the notable experiments include Kharaashein – a play by Salim Arif on Gulzar’s short stories, Udaas Paani – an experimental music album by Abhishek Ray and Gulzar’s Poetry on Canvas by a young Painter Ajay Kumar Samir. Kharaashein has now been published in the form of a book on Radhakrishna Prakashan. Gulzar has won 5 National Awards and 17 Filmfare Trophies. He has been awarded the Sahitya Academy Award for his collection of short stories Dhuaan. Noted celluloid magazine FILMFARE has honored him with a Lifetime Achievement Award for his contribution to Hindi Cinema.

As A Lyricist: Gulzar’s most special role has remained till date as a lyricist. He has worked, as a lyricist, with the most talented people of the Bollywood like: R.D. Burman, A.R. Rahman, S.D Burman, Maden Mohan. Laxmikant-Pyarelal, Rajesh Roshan, Shankar Jaikishan, Salil Chowdhary, Shankar-Ehsaan-Loy, etc. Other than Mirza Ghalib, he has worked on other television series like Tahreer Munshi Premchand Ki and has written the lyrics for serials of Doordarshan like: Jungle Book, Hello Zindagi, Potli Baba ki etc. He had written dialogues for many children’s series on the television, like: Alice in Wonderland, Guchche, Potli Baba Ki etc. Also, when recently Indian and Pakistani media houses combined to start a peace campaign called Aman ki Asha, then Gulzar was asked to write the anthem. He came up with a beautiful compilation of words called Nazar Main Rehte Ho. It was musically composed by Shankar Mahadevan and Rahat Fateh Ali Khan. Gulzar has also worked very closely with the Ghazal Maestro of India Jagjit Singh and worked on his albums like Marasim, Koi Baat Chale, etc.

As A Director: Gulzar had written dialogues and screenplays for movies like: Aashirwad, Anand, Khamoshi, etc. His first directed movie, Mere Apne, was an adaptation of a Bengali movie called Apanjan. The movie did pretty well at the Box Office. He continued his directing streak and directed movies like Parichay, Koshish, Achanak, Aandhi, Khushboo, Mausam, Angoor etc. Parichay in particular was inspired by the Hollywood classic called The Sound of Music. Gulzar’s Aandhi was an adaptation of the book called Kali Aandhi, written by an Indian writer Kamleshwar. This movie was highly acclaimed in India and won Filmfare Critics Award for Best Movie category. Some people believe that the story of Aandhi or Kali Aandhi was based on the personal life of the Ex Prime Minister of India Indira Gandhi and some people believe that it is the story of the Tarkeshwari Sinha. His Mausam was based on the book called The Judas Tree by the writer A.J. Cronin. To be precise, the fragments of Mausam were taken from a story called ‘Weather’ from the book. Mausam bagged a National Award for 2nd Best Feature Film. His Angoor was an adaptation of Shakespeare’s famous play The Comedy of Errors. All of his movies had a common feature to them; these movies were based primarily on the complexity of human emotions and the entanglements of the feelings.