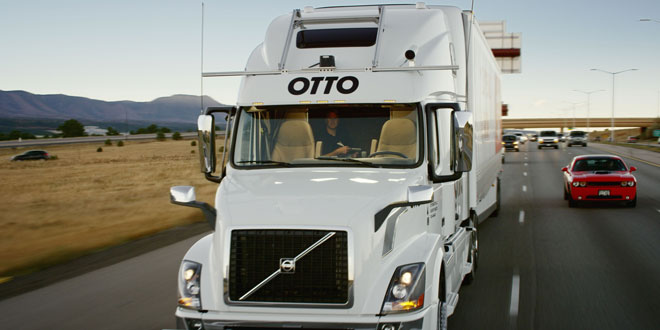 Photo: Anheuser-Busch hauled a trailer loaded with beer 120 miles in an autonomous-drive truck, completing the first commercial shipment by a self-driving vehicle.

The Guinness World Records world record for the longest continuous journey by a driverless and autonomous lorry (semitrailer truck) is 212.433 km (131.99 mi), and was achieved by Ottomotto LLC and Matt Grigsby (both USA) in Fort Collins, Colorado, USA, on 20 October 2016.

Guinness World Records also recognized the world record for the longest driverless metro line; it is the Dubai Metro Red Line which is 52.1 km (32.37 mi) in length and is located in Dubai, UAE, as of 23 May 2011. Dubai Metro’s second line, Green line is 22.5 km (13.98 mi) which when combined with the Red Line will make it longer than the Vancouver Skytrain.

The record was confirmed by the American Transportation Research Institute.

For the majority of that 120-mile trip, the truck’s driver left his seat and observed the road from the comfort of the sleeper berth. An Otto video of the drive shows the slightly disconcerting image of a massive 53-foot trailer filled with 2,000 cases of Bud rumbling down I-25 with no human in the cab.

“The incredible success of this pilot shipment is an example of what is possible when you deploy self-driving technology,” said Otto Co-Founder Lior Ron.

There are approximately 3.6 million class 8 trucks in the U.S. with professional drivers logging more than 279 billion miles in 2014 according to the American Trucking Association.