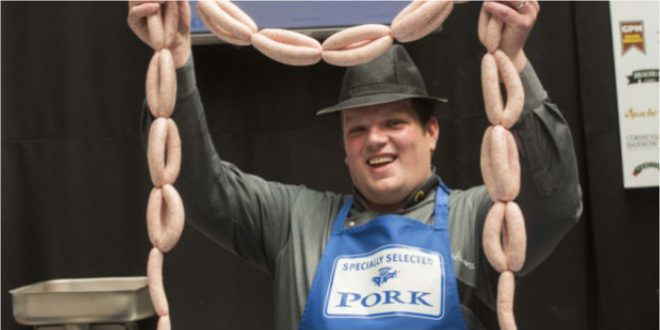 London, UK – June 7, 2016 – Steven Cusack, 29, from Davidsons Butchers made a whopping 54 sausages in 60 seconds at the annual Taste of Grampian food and drink festival, smashing the previous Guinness World Records world record of 44 and setting the new world record for the Most sausages produced in one minute.

Photo: Steven Cusack, from Inverurie, smashed the Guinness record setting a new World Record of 54 sausages in a minute.

The Guinness World Records world record for the most sausages produced in one minute is 44 and was achieved by Liam O’Hagan (UK) in Chichester, West Sussex, UK, on 2 November 2015.

Guinness World Records also recognized the world record for the record for the longest sausage roll is 111.11 m (364 ft 6.4 in) and was achieved by King Pie in Faerie Glen, South Africa on 25 June 2005.

Mr Cusack, 29, who has been working at Davidsons for around 10 years, said his practice had paid off and felt “fantastic” to set a new record.

The record attempt was organised by red meat promotion body Quality Meat Scotland (QMS), who were the title sponsors of this year’s Taste of Grampian event under the Specially Selected Pork brand.

The Specially Selected Pork brand is present on meat from Scottish pig farms under quality assurance schemes supported by the Scottish SPCA.