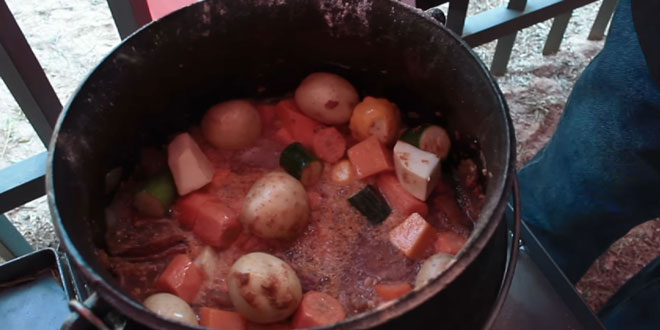 Enkanyisweni, South Africa – May 24, 2017 – Some interesting concoctions were prepared at the Margate Light Plane Club’s potjiekos competition; by having 66 potjies bubbling at once, the Club sets the new world record for the Most potjies cooked simultaneously.

Photo: Some interesting concoctions were prepared at the Margate Light Plane Club’s potjiekos competition. The club broke the Guinness World Record by having 66 potjies bubbling at once.

The Guinness World Records world record for the most people cooking simultaneously is 2,853 and was achieved at an event organised by Tourtrend Sp. z o.o (Poland), at Dolina Charlotty Resort & Spa in Strzelinko, Poland, on 13 June 2015.

Guinness World Records also recognized the world record for the tallest cooked sugar sculpture made in 11 hours; it measures 3.91 m (12 ft 10.4 in) and was made by Alain Roby (France) at Mall of America, Minneapolis, Minnesota, USA on 21 April 2006 during the filming of Guinness World Records week for the Food Network channel.

The current Guinness world record is held by South African actor and writer, Ben Kruger who had an impressive 50 potjies on the go at the Inniebos festival in 2014.

Organiser Melville Hollamby said that would-be chefs came out in their numbers and this was the perfect opportunity for the young (and the not so young) and adventurous to try their hand at potjie cooking, The South Coast Herald reports.

“The food all looked and smelled fantastic, “he said. For those who weren’t particularly hungry, there was a fully stocked cash bar. Great music and karaoke added to the day’s festivities.