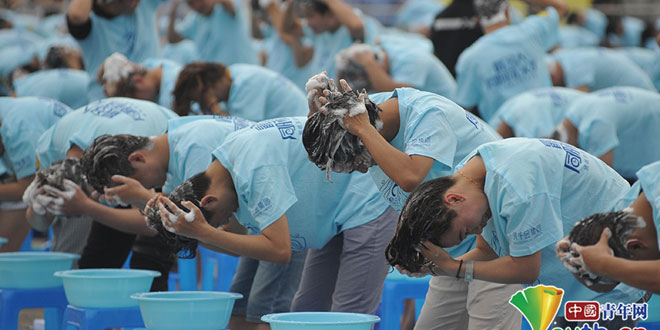 Most people washing their hair simultaneously

Beijing, China – July 12, 2017 – A total of 795 people in the Shanxi capital of Taiyuan washed their hair outside with shampoo simultaneously, thus setting the new world record for the Most people washing their hair simultaneously.

The Guinness World Records world record for the most people washing their feet involved 10,289 people and was achieved by the Administration Committee of Mingyue Mountain Hot Spring Scenic Spot (China) on the set of CCTV-Guinness World Records Special in Yichun, Jiangxi, China, on 13 September 2014.

Guinness World Records also recognized the world record for the most people washing their hands is 37,809 at an event organised by Lifebuoy Team and the federal government of Nigeria at TBS Onikan in Lagos, Nigeria on 14 October 2011.

The record-breaking event’s organizers said that through this activity they hoped that residents would let their worries wash away and be happy.