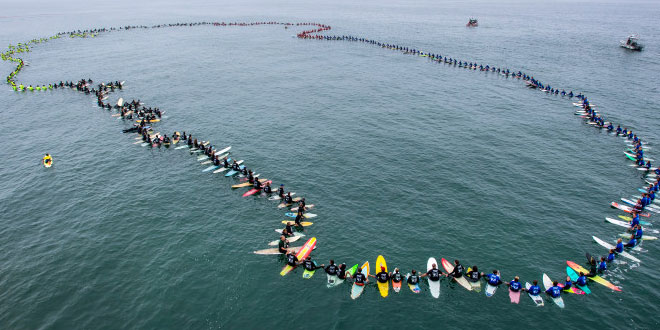 Huntington Beach, California, USA – July 4, 2017 – A total of 511 surfers formed a circle and held hands for one minute while floating off Huntington Beach, thus setting the new world record for the Largest surfing paddle out.

Photo: 511 surfers joined hands today just off the pier in Huntington Beach, setting a World Record for the largest paddle out.

The Guinness World Records world record for the largest surfing lesson involves 320 people and was achieved by RedBalloon (Australia) at Bondi Beach in Sydney, New South Wales, Australia, on 15 December 2015.

Guinness World Records also recognized the world record for the Most consecutive days surfing, set by Dale Webster (USA), who has gone surfing everyday since 2 September 1975. He passed his 10,407th consecutive day of surfing on 29 February 2004.

The paddle-out was conceived as a way to celebrate surfing making it into the Olympic summer games for the first time in 2020.

After nearly two hours of paddling, surfers managed to link hands forming an oblong ring made up of 511 participants.