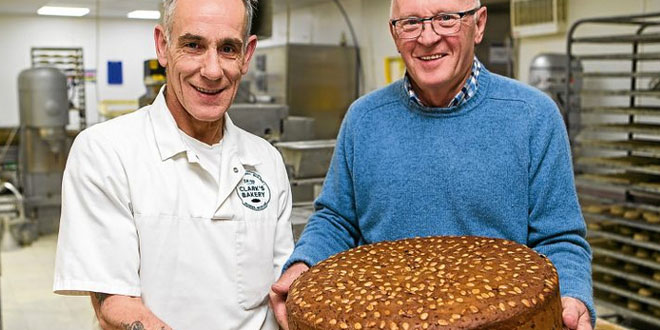 Photo: Baker Colin Smith (left) holds the “biggest Dundee Cake ever made” with bakery owner Alan Clark. At 18 inches round and 26lb — or 11.7kg — the World’s Largest Dundee Cake is nearly four times as heavy as the weight of an average baby at birth.

The Guinness World Records world record for the largest crab cake is 136.08 kg (300 lb) and was created by Handy International Incorporated (USA) in Timonium, Maryland, USA, on 1 September 2012.

Guinness World Records also recognized the world record for the largest truffle cake; it is 1,041 kg (2,295 lb) and was made by the Asociacion de pasteleros de Burgos to celebrate the centenary of CAJA CIRCULO in Plaza España, Burgos, Spain, on 19 March 2009.

The order was commissioned by Duncan of Jordanstone College of Art and Design for Dundee Begoys, a Dundee-themed exhibition taking place at the college, The Evening Telgraph reports.

Alan said: “It’s so big it’s actually 18 inches round and we had to get a special mould for it. I think it’s the biggest cake we’ve ever made anyway.

“To be honest, I can’t see why anyone would want to bake it at that size and it’s extremely hard to do.”

The modern-day take on Dundee Cake is said to have originated in the City of Discovery in the 19th century. It was first popularised when the Keiller’s marmalade company put it into mass production and is said to be one of the Queen’s favourite sweet treats.