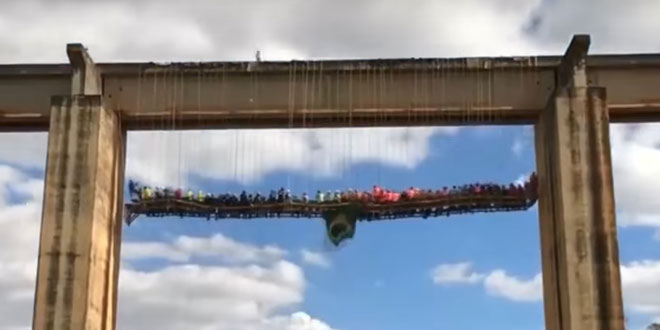 Largest Dinner In The Sky

Sao Paulo, Brazil – August 4, 2017 – A group of 102 brave participants took a seat at a table suspended about 20 meters above the ground; they completed their thrill with eating grilled Brazilian barbecue, thus setting the new world record for the Largest Dinner in The Sky (using rappel).

Photo: 102 absailers rappeled off a 28 metre high abandoned bridge in Sao Paulo state to sit at a large table complete with its own grilling station, suspended 20 metres above ground. Diners tucked into a Brazilian barbecue, called churrasco.

The Guinness World Records world record for the largest Shabbat dinner is 2,322 and was organised by MAKKABI Deutschland e.V. (Germany), in Berlin, Germany, on 31 July 2015.

Guinness World Records also recognized the world record for the largest simultaneous roast dinner was achieved by 1,632 participants in an event organised by East of England Agricultural Society in East of England Showground, Peterborough, UK, on 22 February 2009.

The challenge took place in Sao Paulo with brave participants taking a seat at a table suspended high in the air.

A large table was dangled off a bridge about 20 meters above the ground. The 102 abseilers complete their thrill with eating grilled Brazilian barbecue.

The record-setting endeavor took place at an abandoned bridge in Sao Paulo.

Organizers say this is the first time such a large aerial dining experience has been undertaken using rappel.