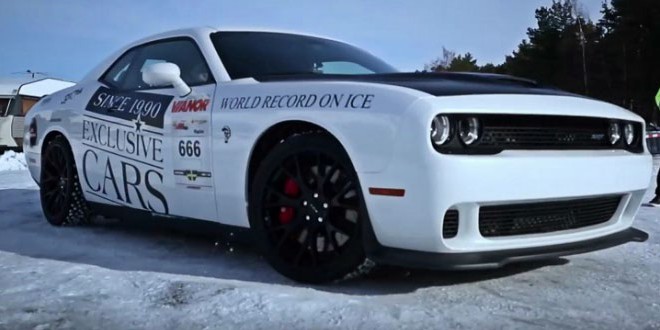 Arsunda, Sweden – March 25, 2016 – The Dodge Challenger Hellcat has a 6.2-liter supercharged V8 that produces a mind-numbing 707 horsepower; it hits a top speed of 170.6 mph at Arsunda Speed Weekend in Sweden, which sets a new world record.

Photo: During the 2016 Arsunda Speed Weekend a Challenger SRT Hellcat hit a staggering 170 mph and averaged 162 mph over 0.6 miles, which sets the new world record for the Fastest Dodge Challenger Hellcat on Ice.

The Guinness World Records world record for the fastest motorcycle wheelie on ice is 206.09 km/h (128.06 mph) and was achieved by Robert Gull (Sweden) in Årsunda, Sweden, on 28 February 2015.

Guinness World Records also recognized the world record for the fastest vehicle slalom relay on ice is 1 minute 11 seconds and was achieved by Mitsubishi Motors North America in Calgary, Alberta, Canada, on 15 January 2011.

The Challenger lets loose with all 707 horsepower and screams down the ice track leaving a snowy trail in its wake.