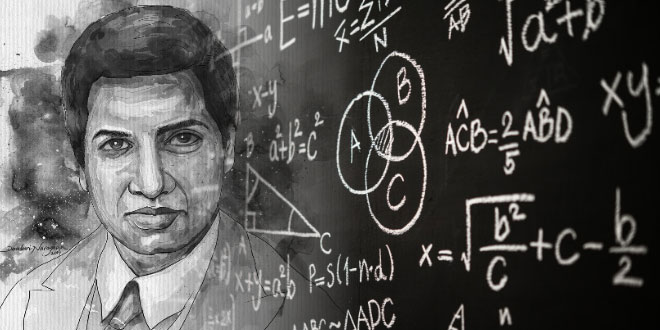 The main objective behind the celebration is to raise awareness among people about the importance of mathematics for the development of humanity. We can’t ignore that several initiatives are taken to motivate, enthuse and inculcate a positive attitude towards learning mathematics among the younger generation of the country. On this day, training is also provided to the mathematics teachers and students through camps and highlights the development, production, and dissemination of teaching-learning materials (TLM) for Mathematics and research in related areas.

How is National Mathematics Day celebrated?

National Mathematics Day is celebrated in various schools, colleges, universities, and educational institutions in India. Even the International Society UNESCO (United Nations Educational, Scientific and Cultural Organisation) and India had agreed to work together to spread mathematics learning and understanding. Along with this, various steps were taken to educate the students in mathematics and spread knowledge to the students and learners all over the world.

NASI (The National Academy of Science India) is the oldest science academy situated in Allahabad. To celebrate National Mathematics Day, NASI conducts a workshop in applications of Mathematics and Ramanujan. The workshop is attended by popular lecturers and experts in the field of mathematics from across the nation. Speakers at the country and world level discuss Srinivasa Ramanujan’s contribution to mathematics.

The two days workshop on the topic ‘History of Indian Maths before 16th Century’ is also organised during 30-31 December, 2019 at the NASI headquarters at Prayagraj.

The theme of the workshop will be important talks/presentations followed by a thorough discussion on the contributions of Indian Mathematicians from the Vedic period to the medieval period which have been accepted by the whole mathematical world without controversy. Discussion in the workshop will cover below-mentioned topics:

All the states of India celebrate National Mathematics Day in different ways. Various competitions and mathematical quizzes are conducted at schools, colleges, and universities. Mathematics talent and students from all over India participate in these programs and workshops.

About Srinivasa Ramanujan and his contribution:

Srinivasa Ramanujan was born on 22 December, 1887, Erode, India and died on 26 April, 1920 at Kumbakonam. His family was of the Brahmin caste and lived in poverty. At the age of 12, he had gained knowledge in Trignometry and without anyone’s help, he had developed his own theorems and ideas. Do you know that at the age of 15 only he obtained a copy of George Shoobridge Carr’s Synopsis of Elementary Results in Pure and Applied Mathematics.

He had spent his childhood days in great difficulty in poverty. He used to borrow books and read books from friends in school. When he was young, he took up the job of clerk to meet the economic needs of the house, and when he gets the time he used to solve mathematics questions and worked on various types of theorems. Once, an Englishman saw those pages,he was impressed and took a personal interest. He sends Srinivasa Ramanujan to the Hardy, the Professor of Oxford University. He then recognized the talent hidden in him and thereafter he got fame worldwide.

His papers were published in the Journal of the Indian Mathematical society in 1911. He had compiled about 3900 results mainly identities and equations that too on his own without anyone’s assistance. Several results out of them are original and novel like the Ramanujan prime, The Ramanujan theta function, partition formulae and mock theta functions. These results further inspired several other research and opened new fields of work. He discovered his own theory of divergent series, worked out the Riemann series, the elliptic integrals, hyper geometric series and the functional equations of the zeta function. Let us tell you that the number 1729 is known as the Hardy-Ramanujan number.