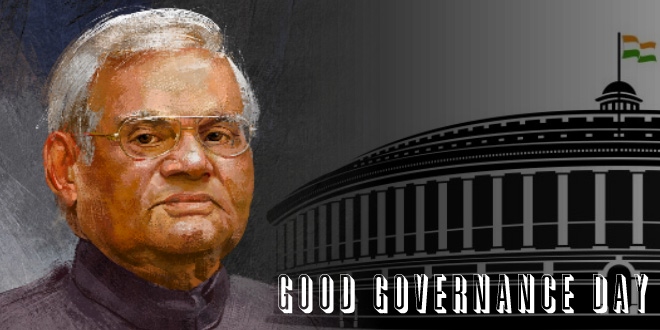 Good Governance Day is observed in India annually on the 25th of December. In this day nation celebrates the birth anniversary of Bharat Ratna and former-Prime Minister Atal Bihari Vajpayee. The day was established in 2014 to honour Prime Minister Vajpayee by fostering awareness among the Indian people of accountability in government. In keeping with this principle, the Good Governance Day has been declared to be a working day for the government.

Atal Bihari Vajpayee served as the Prime Minister of India for three times. His first term was for only 13 days in 1996. He served his second term for a period of thirteen months from March 1998 to April 1999 and then a full term from 1999 to 2004. His first entry into parliament was in 1962 through the Rajya Sabha. He was elected to the Lok Sabha seven times. In 2015, Mr Vajpayee was conferred the Bharat Ratna, India’s highest civilian award.

The declaration of the good governance day is done on the basis of “Good Governance through e-Governance”. It was an event which was to be celebrated by inviting all the government officials for meeting and communication which later comprises as the main function. It is celebrated by organizing a day long exhibition and inviting the government officers to participate as well as suggest something about the e-governance and exhibition.

How to Celebrate the Good Governance Day:

NDA government has declared to celebrate the good governance day on 25th of December every year on the birth anniversary of the Atal Bihari Vajpayee and Madan Mohan Malaviya. Ministry of Human Resource Development (MHRD) has communicated to celebrate the good governance day by organizing variety of activities in the government offices, schools, colleges and other educational institutions.

Students of the schools and colleges participate in many activities such as essay writing competition, debates, group discussion, quiz competitions, sports and so many activities. For the easiness of the students online arrangement of the competitions is also done such as online essay writing, online quiz competition, etc. It is declared that two days long (25th and 26th of December) celebration of the good governance day would take place during which all the students may participate in the activities. It is also confirmed that schools are not necessary to be opened on 25th of December as online competitions are organized.

The birth anniversary of the Atal Bihari Vajpayee is declared to celebrate as good governance day to fulfill many objectives of the country: