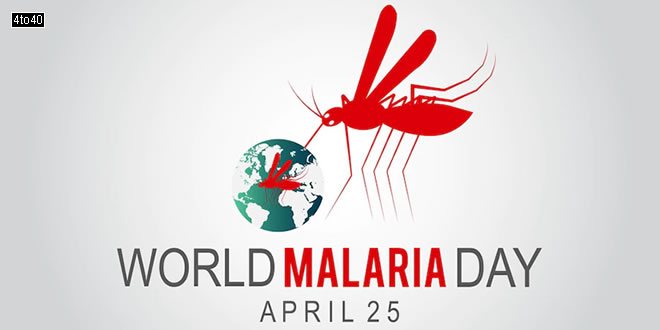 World Malaria Day was established by the 60th session of World Health Assembly in May 2007, which is a governing body of World Health Organization, constituting of 194 member states.

World Malaria Day was established to provide knowledge and information about the causes and spread of Malaria, as well as to provide financial and technical support to anti malaria campaigns across the globe.

Paris and France were the official host for the World Malaria Day. There was a series of activities and events which were organised throughout the city. The events focused on fighting malaria and the steps to prevent it.

The World Health Organisation (WHO) announced the launch of first malaria vaccine for children less than 2 years of age in Africa. The countries which will pioneer in the pilot project are Ghana, Kenya and Malawi. Around 3.6 lakh children will be receiving the vaccine in these African countries post launch of the vaccine.

Awareness posters and pamphlets were distributed ahead of World Malaria Day in various cities of India. In Mysore, a malaria awareness rally was organized by the Health and Family Welfare Department. The rally educated people about techniques to safeguard themselves against mosquito-borne diseases.

World Malaria Day was an outcome of Africa Malaria Day, which was being observed on 25th April since 2001. The historic Abuja declaration signed by the African Union countries in April 2001 set a target of allocating 15% of the country’s annual budget for health sector, and declared 25th April as “Africa Malaria Day”.

Malaria – Cause and Prevention

Malaria is a mosquito borne disease caused by Plasmodium parasites, which get into the blood of infected through the bite of female Anopheles mosquitoes. Though, there are five parasite species that cause malaria, two of them namely, Plasmodium Falciparum and Plasmodium Vivax are the deadliest, accounting for nearly 99.7% of malaria cases in the African region and 74.1 % in American region, respectively.

The first symptoms of malaria appear within ten to fifteen days of getting bitten by an infected mosquito. Initial symptoms include high fever, chills, weakness and headache. When untreated, the symptoms can escalate causing serious illnesses, leading to death.

The most important method of preventing malaria is by controlling the spread of its carriers, that is Anopheles mosquitoes. There are around four hundred species of Anopheles mosquitoes, out of which only 30 are potential carriers of malaria parasites.

The carrier mosquitoes have a tendency of biting between dusk and dawn; therefore, use of mosquito nets during night in rural as well as urban areas is an effective and economical idea. Spread of malaria could be significantly prevented by spraying insecticides and other mosquito repellents, in houses and other public places.

“World Malaria Report” published annually by the World Health Organization, provides the facts and figures on the status of malaria globally. The report also speaks of the progress of various anti malaria campaigns and their financial aspects.

According to the last World Malaria Report released on 19th November 2018, an estimated 219 million cases of malaria have been reported in the preceding year, causing nearly half a million deaths globally. African countries were the most affected, by being home to 92% of the global malaria cases and 93% of causalities due to malaria.

The World Malaria Report, released in 2017, projected an increase of around five million malaria cases in 2016 than in 2015. The report had also estimated the global death toll due to malaria to be around half a 4.5 million cases, nearly similar to the previous year. Despite initial successes, the 2017 report indicated a stalled progress for two years in a row, despite previous progresses. There were 239 million globally reported cases in 2010 than 2014 million in 2015.

Till the year 2016, India was in top three countries with the highest malaria cases, with nearly thirteen million reported cases. However, the world Malaria Report released in 2017, estimated a reduction of around 3 million cases in India since 2016, removing India from among the top three countries with malaria burden. It was a significant progress achieved by only India, among the eleven nations with over 70% of malaria burden. However, the report also estimated around 1.25 billion Indians to be at risk of Malaria.

India’s success was largely due to the decline of malaria cases in the Indian state of Odisha. Odisha had been home to 40% of total malaria cases in the country. The state of Odisha was successful in reducing the reported cases by almost 80%, from 3, 47,860 in 2017 to 55,000 in 2018. The malaria eradication program was called, “Durgama Anchalare Malaria Nirakaran” (in short DAMaN) in local language which translates to “elimination of malaria in inaccessible regions”.

Though, India accounts for only 4% of total malaria cases reported globally, unfortunately it also accounts for 52% of the total malaria deaths caused outside the African region. India has set a target of eradicating malaria by the year 2030.

Despite the commendable efforts by the World Health Organization, respective governments and other relevant bodies in fighting malaria, the global campaign against malaria is facing an acute financial crunch.

The 2030 target of the world Health Organization on global malaria strategy calls for an annual investment of 6.5 Billion US dollars by the year 2020, which is significantly higher than 3.1 Billion US dollars, spent in 2017. The greatest share of the allocated money, around 2.2 Billion US Dollars was spend on malaria control and elimination efforts in African region, the rest was distributed among other malaria infested regions of south east Asia, Americas and the Mediterranean.

During the financial year 2017-2018, Rs. 468.5 crore were allocated to the programs related to malaria as well as other vector borne diseases. In Indian scenario, a large amount of allocated fund is spent on salaries and bearing other administrative costs, reducing the effectiveness of allocated funds. There is a need to make necessary policy changes, so that less money is spend on the salaries and more on the malaria elimination efforts.

Also, India has an estimated need of 250 Million Long Lasting Insecticidal Nets (LLIN), but had only procured 12.4 Million and 5 Million LLINs in 2014 and 2016 respectively. There is an immediate need to allocate more funds to provide more momentum to the efforts against malaria and to eliminate malaria by 2030.

According to WHO, Malaria is a preventable and treatable disease that continues to have a devastating impact on the health and livelihood of people around the world. “In 2020, there were an estimated 241 million new cases of malaria and 627 000 malaria-related deaths in 85 countries. More than two thirds of deaths were among children under the age of 5 living in the WHO African Region,” according to World Health Organisation.

While everyone known about the common symptoms of malaria from fever, chills, headache, there are other lesser-known manifestations of the disease that you should be aware of.

A grand event on World Malaria Day was organized on 25th April 2018 at New Delhi. The event was organized by World Health Organization’s country office in collaboration with Ministry of Health and Family Welfare (MoHFW), Government of India and National Vector Borne disease control program.

World Malaria Day celebration 2018 coincided with the 70th anniversary of the World Health Organization. The focus of the event was to highlight the need to maintain the efforts towards elimination of malaria and seek commitment from political parties and other stake holders.

WHO representative to India, Dr. Henk Bekedam, praised the government of India for its efforts in eliminating malaria. Various other senior officials and dignitaries were present at the event.

Later in the day, Dr. Henk Bekedam was handed over a ministerial declaration by Mr. J.P. Nadda, the Union Minister of Health and Family Welfare, Government of India. The declaration was made to accelerate the efforts and to eliminate malaria, and was signed at a high level round table in November 2017.

There are a number of World Malaria Day activities to contribute to the global efforts towards malaria eradication. Below listed are some of the significant and effective activities, which could really help in making your village, city or community, free from malaria.

Despite the efforts of global community, malaria epidemic is far from being completely eradicated with a gradual increase in the number of affected and dead, every year. It is estimated that every two minutes a child dies due to malaria, across the globe. Malaria has also severe consequences on the health and economy of a nation.

Observance of the World Malaria Day reignites the resolve of governments and general public to fight malaria and seek its elimination. It also helps the campaigns in garnering technical, logistical and financial support to push forward the fight against malaria.

It also helps keep malaria eradication high on the government’s agenda, and also gives a chance to general populace to interact with local leaders and office bearers about government’s strategy for eradication of malaria. Various malaria check up camps and free medicine distribution camps are organized at the remotest of locations around the globe for economically backward sections.