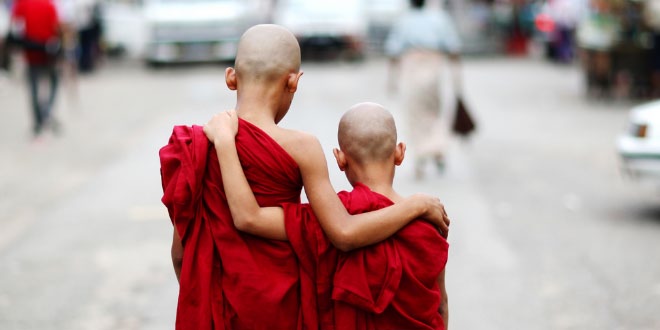 Although Buddhists regard every full moon as sacred, the moon of the month of Vaisakh has special significance because on this day the Buddha was born, attained enlightenment (nirvana), and attained parinirvana (nirvana-after-death of the body) when he died.

Shakyamuni Buddha, the historical founder of Buddhism, was born in India 3,000 years ago. There are various opinions concerning the exact dates of his birth and death, but according to Buddhist tradition, he is said to have been born April 8, 1029 BC and died on February 15, 949 BC, although other Buddhist scholars place his birth five hundred years later.

Shakyamuni Buddha was the son of the king of the Shakyas, a small clan whose kingdom was located at the foothills of the Himalayas, south of what is now central Nepal, fifteen miles from Kapilavastu. Shakya of Shakyamuni is taken from the name of this tribe and muni means sage or saint. His family name was Gautama (Best Cow) and his given name was Siddhartha (Goal Achieved) though some scholars say this is a title bestowed on him by later Buddhists in honour of the enlightenment he attained.

Even though many Buddhists observe Buddha’s historical birth on April 8, the exact date remains in question. Although modern archeological and historical research confirms that Prince Siddartha Gotama lived around this time.

The exact date of Vesak is the first full moon in the fourth month in the Chinese lunar calendar. The date varies from year to year in the Gregorian calendar, but is typically in May.

What we are is the result of what we have thought,
is built by our thoughts, is made up of our thoughts.
If one speaks or acts with an impure thought,
suffering follows one,
like the wheel of the cart follows the foot of the ox.

What we are is the result of what we have thought,
is built by our thoughts, is made up of our thoughts.
If one speaks or acts with a pure thought,
happiness follows one,
like a shadow that never leaves.

“They insulted me; they hurt me;
they defeated me; they cheated me.”
In those who harbour such thoughts,
hate will never cease.

“They insulted me; they hurt me;
they defeated me; they cheated me.”
In those who do not harbour such thoughts,
hate will cease.

For hate is never conquered by hate.
Hate is conquered by love.
This is an eternal law.
Many do not realise that we must all come to an end here;
but those who do realise this, end their quarrels at once.

Whoever lives only for pleasures,
with senses uncontrolled,
immoderate in eating, lazy, and weak,
will be overthrown by Mara,
like the wind throws down a weak tree.

Whoever lives not for pleasures,
with senses well controlled,
moderate in eating, has faith and the power of virtue,
will not be overthrown by Mara,
any more than the wind throws down a rocky mountain.

Whoever would put on the yellow robe
without having cleansed oneself from impurity,
disregarding self-control and truth,
is not deserving of the yellow robe.

But whoever has cleansed oneself from impurity,
is well grounded in all the virtues,
and is possessed of self-control and truth,
is deserving of the yellow robe.

Even if the thoughtless can recite many of the scriptures,
if they do not act accordingly,
they are not living the holy life,
but are like a cowherd counting the cows of others.

Even if the faithful can recite
only a few of the scriptures,
if they act accordingly,
having given up passion, hate, and folly,
being possessed of true knowledge and serenity of mind,
craving nothing in this world or the next,
they are living the holy life.