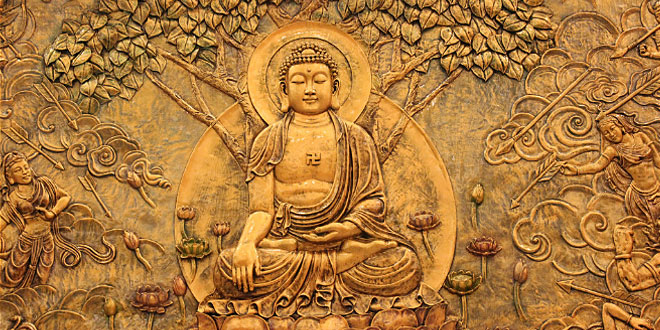 Sarojini Naidu was an Indian independence activist, poet and politician. A renowned orator and accomplished poet, she is often known by the moniker ‘The Nightingale of India‘. As a prodigious child, Naidu wrote the play “Maher Muneer“, which earned her a scholarship to study abroad. She became the second woman president of the Indian National Congress. She was the first woman Governor of an Indian state after independence. Her collection of poems earned her literary acclaim. In 1905, she published her first book, a collection of poems, under the title of “Golden Threshold”. A contemporary poet, Bappaditya Bandopadhyay quoted “Sarojini Naidu inspired the Indian renaissance movement and had a mission to improve the life of Indian woman.”

Lord Buddha, on thy Lotus-throne,
With praying eyes and hands elate,
What mystic rapture dost thou own,
Immutable and ultimate?
What peace, unravished of our ken,
Annihilate from the world of men?

The wind of change for ever blows
Across the tumult of our way,
To-morrow’s unborn griefs depose
The sorrows of our yesterday.
Dream yields to dream, strife follows strife,
And Death unweaves the webs of Life.

For us the travail and the heat,
The broken secrets of our pride,
The strenuous lessons of defeat,
The flower deferred, the fruit denied;
But not the peace, supremely won,
Lord Buddha, of thy Lotus-throne.

With futile hands we seek to gain
Our inaccessible desire,
Diviner summits to attain,
With faith that sinks and feet that tire;
But nought shall conquer or control
The heavenward hunger of our soul.

The end, elusive and afar,
Still lures us with its beckoning flight,
And all our mortal moments are
A session of the Infinite.
How shall we reach the great, unknown
Nirvana of thy Lotus-throne?

∼ To A Buddha Seated On A Lotus: Sarojini Naidu