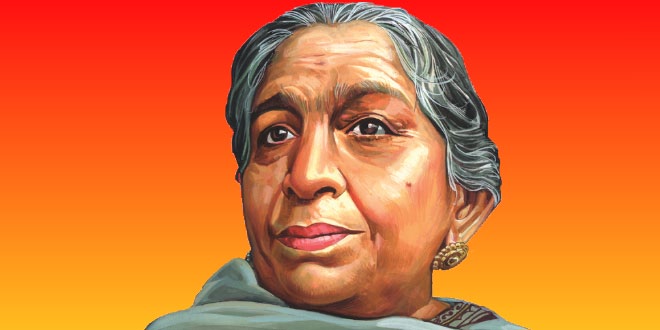 She was a brilliant student. She was proficient in Urdu, Telugu, English, Bengali, and Persian. At the age of twelve, Sarojini Naidu attained national fame when she topped the matriculation examination at Madras University. Her father wanted her to become a mathematician or scientist but Sarojini Naidu was interested in poetry. She started writing poems in English. Impressed by her poetry, Nizam of Hyderabad, gave her scholarship to study abroad. At the age of 16, she traveled to England to study first at King’s College London and later at Girton College, Cambridge. There she met famous laureates of her time such as Arthur Simon and Edmond Gausse. It was Gausse who convinced Sarojini to stick to Indian themes-India’s great mountains, rivers, temples, social milieu, to express her poetry. She depicted contemporary Indian life and events. Her collections “The golden threshold (1905)”, “The bird of time (1912)”, and “The broken wing (1912)” attracted huge Indian and English readership.

At the age of 15, she met Dr. Govindarajulu Naidu and fell in love with him. A non-brahmin, and a doctor by profession. After finishing her studies at the age of 19, she married him during the time when inter-caste marriages were not allowed. It was a revolutionary step but Sarojini’s father fully supported her in her endeavor. Sarojini Naidu had a happy married life and had four children: Jayasurya, Padmaj, Randheer, and Leilamani.

Sarojini Naidu joined the Indian national movement in the wake of partition of Bengal in 1905. She came into contact with Gopal Krishna Gokhale, Rabindranath Tagore, Muhammad Ali Jinnah, Annie Besant, C.P.Rama Swami Iyer, Gandhiji and Jawaharlal Nehru. She awakened the women of India. She brought them out of the kitchen. She traveled from state to state, city after city and asked for the rights of the women. She re-established self-esteem within the women of India.

After Independence, Sarojini Naidu became the Governor of Uttar Pradesh. She was India’s first woman governor. Sarojini Naidu died in office on March 2 ,1949.