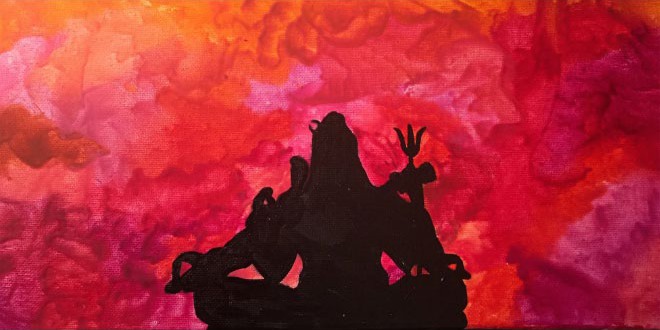 Lord Shiva Poem: Lord Shiva or Mahadeva is the supreme god in Hinduism and one of the chief deities as a member of the Trimurti. Shiva is causeless auspiciousness. An embodiment of ultimate space of enlightenment. He assumed human form to guide humans in the past and thus is known as Adhiguru (first guru).

On the white summit of eternity
A single Soul of bare infinities,
Guarded he keeps by a fire-screen of peace
His mystic loneliness of nude ecstasy.

But, touched by an immense delight to be,
He looks across unending depths and sees
Musing amid the inconscient silences
The Mighty Mother’s dumb felicity.

Half now awake she rises to his glance;
Then, moved to circling by her heart-beats’ will,
The rhythmic words describe that passion-dance.

Life springs in her and Mind is born; her face
She lifts to Him who is Herself, until
The Spirit leaps into the Spirit’s embrace.

The Shiva-related tradition is a major part of Hinduism, found all over the Indian subcontinent, such as India, Nepal, Sri Lanka, and Southeast Asia, such as Bali, Indonesia. Scholars have interpreted early prehistoric paintings at the Bhimbetka rock shelters, carbon dated to be from pre-10,000 BCE period, as Shiva dancing, Shiva’s trident, and his mount Nandi. Rock paintings from Bhimbetka, depicting a figure with a trishul, have been described as Nataraja by Erwin Neumayer, who dates them to the mesolithic.

His space of enlightenment is what all spiritual seekers aspire for. All enlightened masters live in this space of Shiva. Shiva is known as the destroyer god because he removes all evil from the world. His wife is the goddess Parvati or Devi Durga.

According to Hindu legend, he has a blue neck because he swallowed a poison in order to save the universe. He has three eyes, the third eye is on his forehead. Shiva is one-third of the Hindu trimurti including Brahma and Vishnu. Lord Shiva lives in the Mount Kailash with his two sons Kartikeya and Ganesha who is known as the Remover of Obstacles. There is a statue of Shiva in Bangalore which is a great tourist attraction.